Bow before the new king of the road. 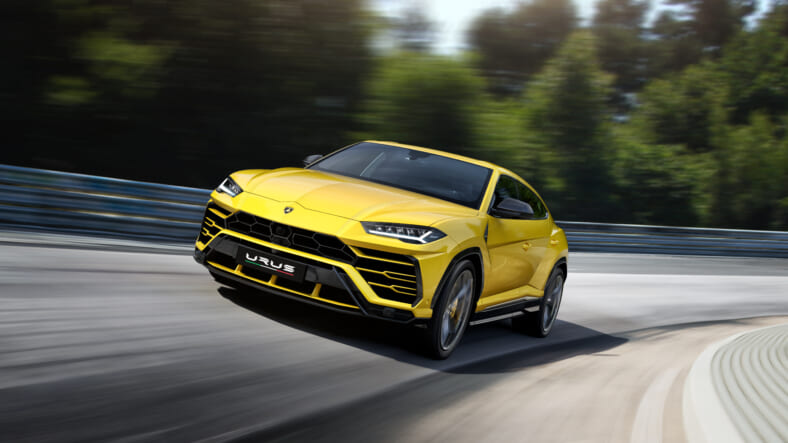 Lamborghini wowed the press gathered in Detroit for the North American International Auto Show when it rolled out the new Urus for its public debut as the brand’s first attempt to merge Lamborghini verve with crossover SUV utility.

Lamborghini seems to have passed that test in terms of providing the superlative performance expected from machines bearing the Raging Bull badge, with the long-awaited Urus boasting a 190-mph top speed, 3.5-second 0-60 mph acceleration and 650 horsepower.

There is an intelligent, torque-vectoring all-wheel drive system that contributes as much to the Urus’s capabilities on the Nürburgring circuit as on the equally legendary Rubicon Trail. The system normally sends 60 percent of torque to the rear wheels, but it can increase that to as much as 87 percent for true rear-drive dynamic handling feel.

“It is a true Lamborghini in terms of design, performance, driving dynamics and emotion as well as drivable every day in a range of environments,” stated Stefano Domenicali, Automobili Lamborghini chairman and CEO.

“The Urus fits perfectly within the Lamborghini family as a high performance car. It is the culmination of intensive development and passionate skill to create a new breed of bull: a Super SUV that transcends the boundaries of expectations and opens the door to new possibilities, for both our brand and our customers.”

The Urus shares its chassis underpinnings with corporate cousins, the Audi Q7, Porsche Cayenne and Bentley Bentayga. This hardware hides beneath moderately aggressive sheetmetal that is a step back from Lamborghini’s usual in-your-face styling.

This is no surprise, considering that customers won’t be buying racetrack fantasy supercars, but grocery-getting SUVs, so their tastes are apt to be more conservative.

However, Lamborghini will prove the Urus at the racetrack, to preserve the brand’s ultra-performance image. Once the weather in Germany warms up, the company will head to the Nurburgring, with the goal of beating the 7:51.7 time set by the Alfa Romeo Stelvio, to claim the title of “world’s fastest SUV.”

Lamborghini already found one area where it could distinguish the Urus from competitors and that is by providing monstrous wheels directly from the factory. The base wheels are 21 inches in diameter, with optional 23-inch wheels available, which should provide an imposing stance curbside.