The iconic off-roader is making a long-awaited comeback. 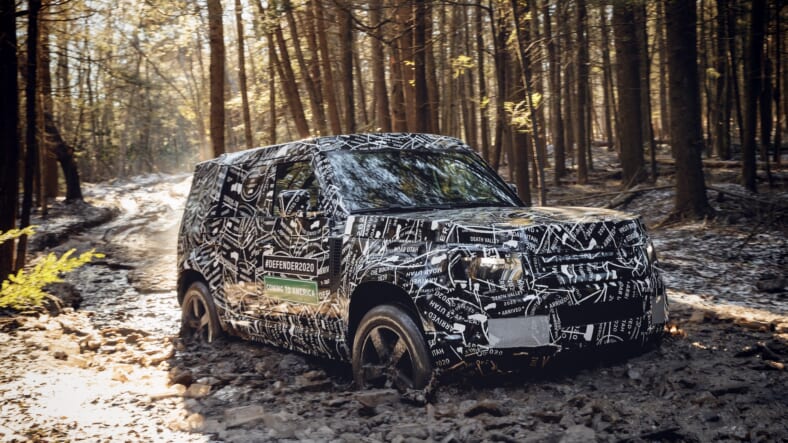 Land Rover dropped a bomb on Thursday while many of us were still nursing holiday hangovers: the brand new Defender is being officially tested in prototype form and will return to the U.S. market in 2020 after a 23-year absence.

The British automaker released pix of a camouflaged test mule engaged in classic Land Rover activities which shows a vehicle that looks a bit like a juiced-up LR4, the Land Rover Discovery model replaced last year.

While calling it a prototype will allow Land Rover to tinker with the design a bit, the immediate reaction from Defender purists – who are legion – is sure to be that they should have left well enough alone and just duplicated the classic body style as much as possible.

Its essential form remained largely unchanged from 1948 through 2016, when the final Defender (number 2,016,933) rolled off the assembly line. While calling this new one a prototype will allow Land Rover to tinker with the design a bit, the immediate reaction from Defender purists – who are legion – is sure to be that they should have left well enough alone.

While various factors from safety to fuel efficiency are said to have forced a fairly radical redesign, it’s worth noting that Mercedes-Benz has managed to bring the beloved G-Wagen up to date without significantly altering its appearance.

“Engineers will subject the vehicle to rigorous test extremes to make sure the new Defender is the most off-road capable Land Rover vehicle ever,” the company promises, “operating in temperatures from -40F to +120F [and] at altitudes of more than 13,000 feet above sea level.” The price has yet to be revealed.

In its own communiqué Land Rover notes that over its lifespan changes to the original off-roader, which began as Series models before taking on the Defender moniker in 1991, have been “largely evolutionary, rather than revolutionary,” which is in large part what guaranteed its iconic status. “Even the design of the previous generation Defender remained largely unchanged for the 33 years it was produced.”

Obviously they’re hoping that the new model’s feats of engineering will be enough to offset the fierce nostalgia felt by the Defender’s many fans. Land Rover says the 2020 Defender will have “an all-new exterior and interior design, as well as a suite of the latest driver assistance and connectivity features available,” insisting it will “honor the model’s history for rugged durability, while thoroughly remaining a Defender for the 21st century.”

Maybe for its final reveal in 2019 Land Rover will pull a few bits off and the new Defender will magically come to be a spitting image of its famous forebear. We can only hope.