This apocalyptic Buick that set a word record for fastest car in its class can now be yours. 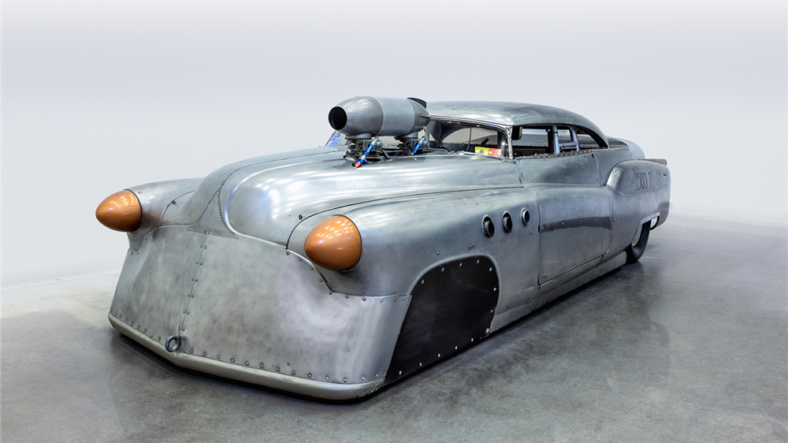 As if the mere appearance of this apparition weren’t enough, imagine the terror of actually piloting a evil-looking custom 1952 Buick at 165 mph across the Utah wasteland. That’s how fast this aluminum-bodied streamliner went when it set a land speed record (for naturally aspirated gasoline-fueled cars with inline engines, in case you were wondering) at the Bonneville Salt Flats in 2013.

The car sold over the weekend at the Barrett-Jackson auction in Las Vegas for $36,300, a bargain price that probably didn’t cover the cost of that custom lightweight body or its racing-spec 320 cubic-inch straight eight engine.

Inspired by the Anthony Hopkins movie The World’s Fastest Indian, owner Jeff Brock and his team built the Buick in three short months in 2009, when he set a record of 130.838 mph. Subsequent aerodynamic improvements led to the car’s ultimate velocity in 2013.

The classic straight eight engine employs a custom intake manifold mounting a pair of Jegs racing carburetors, with air forced in by a ram air scoop. Fuel comes from a small four-gallon racing fuel cell mounted under the hood.

Inside, Betty is a pure race car, with all the modern safety equipment.

No word on whether the Humongous or another of Mad Max‘s adversaries was the winning bidder.