This Crazy Lazereth Roadster Is Half Car, Half Motorcycle

The eccentric French outfit brings us a three-wheeler that actually has four wheels. 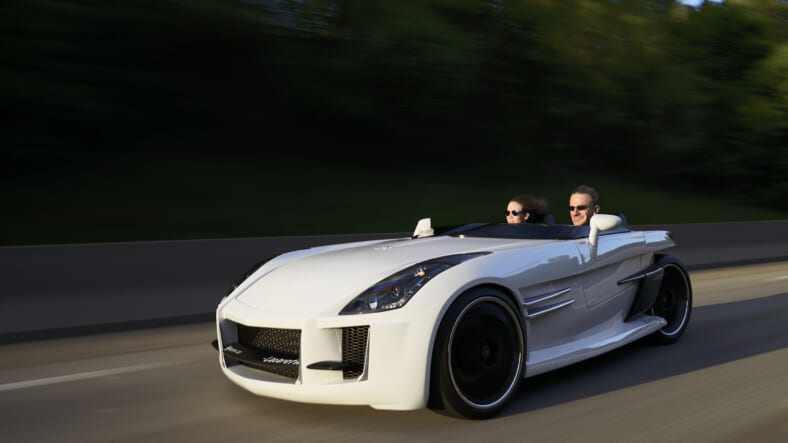 The GT has a two-seat cockpit and no windshield, so if you’re driving without a helmet, bring some goggles. The effect is similar to that of the Polaris Slingshot and the Tanom Invader, both of which do only have a single rear tire.

Where the Slingshot uses a General Motors 4-cylinder car engine and the Invader uses a Suzuki motorcycle engine, the Wazuma GT employs a 375-horsepower supercharged Jaguar 4.0-liter V8, so it needs both rear tires to put the engine’s power to the road.

Certainly the Wazuma GT’s tidy proportions convey an intimacy between driver and passenger and make it easy to drive and park in crowded urban settings. But obviously a sports car like the Wazuma GT is meant to be exercised on rural highways, which is where its lightweight 2,200 lb. mass makes it livelier than bigger roadsters like Jaguar’s own F-Type.

Some of those other cars’ mass comes from windshields and folding roofs, but as a fair weather friend, the Wazuma GT is inviting. There is no word yet on the car’s expected price or availability in France. To meet U.S. legal requirements, it would have to be converted to a true three-wheeler to certify it as a motorcycle.

You’ll probably need to go to France to get bugs in your teeth at the wheel of this pseudo-trike.