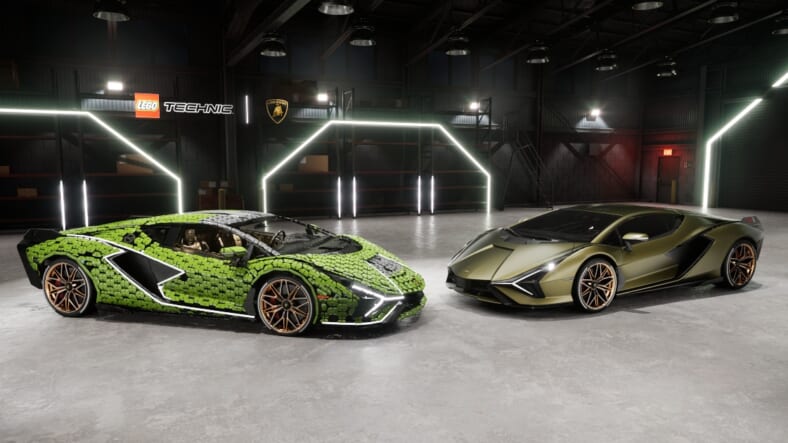 This is basically the story of one company honoring another’s feat of engineering with its own incredible creation. It’s difficult to characterize the geniuses at Lego putting together a full-sized replica of the Lamborghini Sián FKP 37 hybrid hypercar using over 400,000 Lego Technic pieces any other way.

Lego’s tribute to the hybrid supercar is awesomely detailed, as it should be after taking about 8,660 hours to complete. The 400,000 Lego pieces used to make it were comprised of 154 different types and the company created 20 intended only for this particular project.

The Lego Lambo mirrors the real Sián’s gorgeous curves to a T. It isn’t a lightweight construction that could fall apart, either, as it weighs over two tons — compare that to similar Lambos that clock in at just over 3,500 pounds.

In a press release, Lamborghini President and CEO Stephan Winkelmann said they are “delighted to have collaborated on this unique edition of the Lamborghini Sián, that will catch the imagination of Lamborghini and LEGO fans alike.“

The collaboration between the two companies’ designers, engineers and technicians, took a team of 15 people 8,660 hours of development work and painstaking construction. The proportion-perfect chassis is identical to the real-life Sián at 4,980 mm long, 2,101 mm wide and 1,133 mm high. The body panels are comprised of an intricate fabric of bespoke interconnecting hexagonal LEGO Technic elements, paying homage to the six-sided shape that is integral to Lamborghini’s design language. The Sián’s name, meaning ‘flash’ or ‘lightning’ in Bolognese dialect, is honored by the LEGO Group’s experts who have ensured that the lights, built entirely from Technic elements, and the sleek lightning bolt that flashes along the body, reflect how the real Sián’s epsilon headlights and hexagonal taillights power up and down. Inside the cockpit the detail continues with a brick-built steering wheel featuring the Lamborghini emblem and Italian flag, LEGO built dashboard controls and racing seats.

Lego Senior Vice President of Product and Marketing Lena Dixen said in the same press release that her company’s “designers love a challenge, so you can imagine their delight when we tasked them to think slightly larger than normal with this model.”

“They jumped at the chance of teaming up with our amazing designers and engineers who build these impressive life-sized models,” Dixen said before going on to note that “the creativity that the [Lego] system allows meant it was possible to really do justice to the exceptional design of the Lamborghini Sián FKP 37.”

The full-scale Lego Lamborghini Sián is one of a kind and won’t be put up for sale. You can check it out up close thanks to this virtual workshop, where users get a detailed look at the model and more details on the project in general from the designers and engineers.

If the Lamborghini Sián FKP 37 is irresistible but like most folks, you can’t afford it, Lego also has 1:8 scale model that retails for $380.