This sporty, V-8 powered Lexus is hoping to leave Dullsville in the dust. 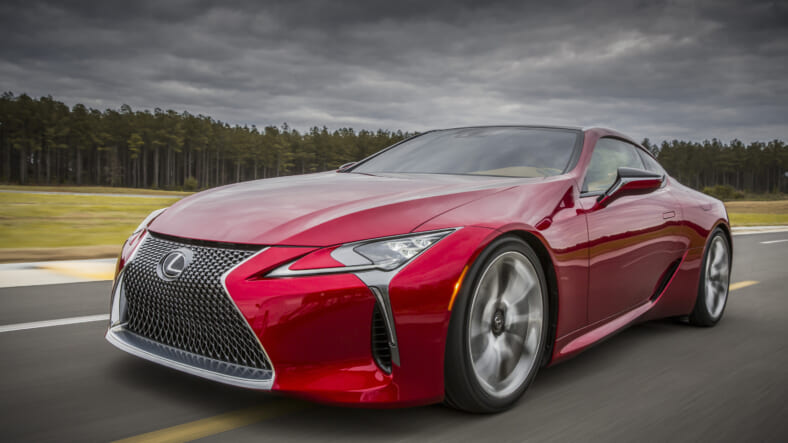 When Lexus showed the LF-LC concept car at the Detroit Auto Show in 2012, the company had no intention of building the car, according to Toyota president and founding family scion Akio Toyoda (they changed the spelling slightly for the company’s name). The company’s engineers didn’t even believe they could build the crazy concept, with its dramatically sculpted lines.

But Toyoda, stung by the perception that Lexus is “boring,” resolved to produce the car in very nearly the same form as the concept in a bid to dispel that image. “Everyone wanted to make this car as close as possible to the concept,” he said.

The car is a scant two inches longer than the RC, but the LC is the first new model built on the company’s all-new chassis, with huge strides in stiffness and weight reduction thanks to extensive use of carbon fiber, aluminum and high-strength steel.

The LC500 is powered by the same 467-horsepower 5.0-liter V8 engine seen in the Lexus RC, but it is matched to a new 10-speed automatic transmission that uses lightweight aluminum gears for quicker shifts than the company’s current 8-speed gearbox.

This kind of hardware should deliver on the expectations cultivated by the LC500’s swoopy lines, ensuring that future Lexus customers are a bit more enthusiastic than those in the past.

“The LC500 is what an emotional Lexus looks like to me,” Toyoda exclaimed. This is the kind of car that, along with hot rods like the RC-F we drove, will start to shift the image of Lexus.

“I don’t ever want to see “Lexus” and “boring” in the same sentence again!” he said.