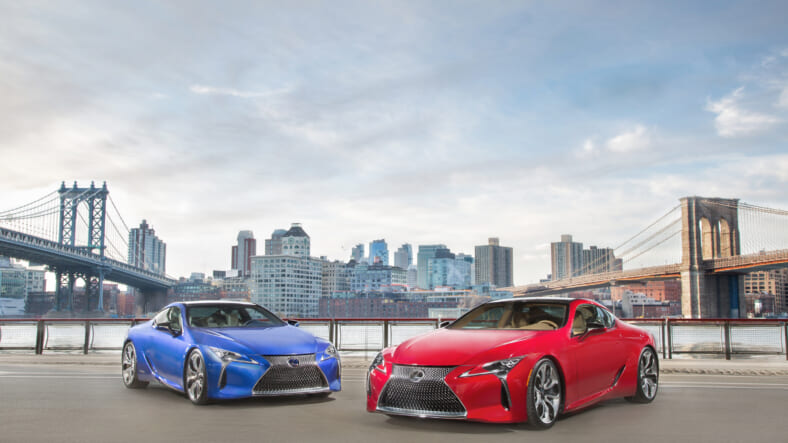 I could have sworn someone at Lexus had made a huge mistake.

The Japanese automaker invited me to Hawaii of all places to experience the company’s new flagship sports car, the LC500. In the days leading up to the event I was fortunate enough to tour around the Big Island in a rental car… although I found that Hawaii can be a difficult place to drive. After all, when you want to stop every 50 feet to take a photo it’s hard to really get into a driving groove. Between the paradisiacal beaches, the lava-spewing volcanoes, and the straight-out-of-Jurassic Park jungles, it’s nearly impossible to keep one’s eyes on the road.

So it was with skepticism on my behalf that I was given an LC500 by the Lexus team and told to drive the belt road around the island to see what the new offering could do. Only hours later, as I rolled back into the Four Seasons Hualalai parking lot to return the car, did I realize that I hadn’t noticed any of the scenery that had so enthralled me days earlier. The driving experience provided by the Lexus had completely monopolized my attention and in doing so, had laid a claim to finally being able to compete with, and possibly defeat, their longtime nemeses from Germany: Mercedes-Benz, BMW and Audi.

While the LC500 represents a major step forward for Lexus, it hasn’t arrived out of the blue. Lexus has been improving their model line consistently in recent years, highlighted by the phenomenal offerings in the F and F-Sport lines. This improvement in power and handling capabilities has balanced nicely with the industry-leading interiors that would be appropriate for offerings twice as expensive.

The LC500 builds on this recent trend with its own version of Lexus’ V8, already found in the GS F and RC F models. This 5-liter version is tuned to provide 471 horsepower and 398 lb.-ft. of peak torque, enough to push the LC500 from 0-60mph in under 4.5 seconds. Paired to a 10-speed transmission, the engine is playful and enthusiastic, reveling in the 5000 rpm range before redlining around 7,300 rpm. Lexus’ claim that this transmission can offer shifts as quick as a dual-clutch system are well-founded as the engine seamlessly moves up through the gears.

Downshifts, meanwhile, are accompanied by a soundtrack of pops and crackles that would make any car aficionado’s heart flutter. It’s an adrenaline-pumping driving experience, not undermined in the least by the leather-bound interior that surrounds passengers in opulent comfort. In addition, the LC500 is gorgeous from all angles, with hints of the LFA, SC, RC and IS ranges found throughout the design, and an aggressive stance that makes the LC500 an angry-looking visitor to one’s rear view mirror.

For as long as Lexus has been crafting vehicles, there’s always been one factor that’s held them back when compared to their German counterparts—weight. Lexuses (Lexi?) have long had their power, handling and stability compromised by the heft resulting from the luxurious interiors and solid construction. Understeer was a constant expectation when pushing a Lexus through corners, and acceleration was underwhelming when considering the stated power outputs of the cars. This seems to have changed with the LC500. Despite a curb weight of 4280 lbs, and a less than ideal 54/46 weight distribution, the LC500 feels like a featherweight when compared to its predecessors. Entering corners, the nose dips into the turn, surprising at first with its nimbleness, as the back end lightens up just enough to avoid understeer. On the exit, the car leaps forward as if released from restraints, as the rear end replants itself to allow the back wheels to transfer the supplied power to the road.

So how is this possible if the company didn’t significantly cut weight? According to one of the Lexus engineers in attendance, they focused not on removing weight but instead arranging the weight within the car in a way that made the car feel lighter even if it wasn’t actually shaving off the pounds. As many parts of the LC500 as possible were shifted towards the middle of the car and lowered, producing an improved center of gravity. The 54-46 weight distribution wasn’t a concern as long as the car felt evenly balanced. If I hadn’t driven the car myself, I’d say this sounds like salesmanship, but the truth matches the claim, as the car, despite weighing more than two tons, has the agility and nimbleness of a vehicle hundreds of pounds lighter.

There are some drivers who want an aggressive sports car ride and others who prefer a tranquil journey in lush comfort. For a starting MSRP of $92,000, the LC500 can actually provide both of these experiences, a sort-of split personality working in perfect harmony.

Imagine this scene: You are cruising down some backroad at 35-40 mph, 4,000 rpm in third gear. This is where you have the choice between Dr. Jekyll and Mr. Hyde. Snap the magnesium paddles behind the steering wheel to shift into fourth gear and suddenly you’re behind the wheel of a buttoned-up luxury car, quiet and serene. It feels closer to a Lexus LS or Mercedes S class than a sports car. Or you can choose to drop down to second gear, producing a roar of popping and crackling from the active exhaust, and suddenly you feel as if you’ve climbed into the LFA, Lexus recent world-beating supercar. The high-pitched whine and ferocious torque of the engine reminiscent of a hardcore supercar costing twice as much as the LC500.

This is perhaps the most brilliant aspect of the LC500. It can serve multiple roles, and will perform ideally regardless of whether you woke up in the mood for a raucous adrenaline-pumping journey or a tranquil commute with as little noise and excitement as possible.

4. Actually Going from Concept to Production

One of the most frustrating aspects of the automotive industry has long been the creation and presentation of concept cars by the world’s automakers. For years, automotive fans have been teased by extravagant and out-of-the-box automotive creations at auto shows and press launches, only to be informed that these ideas will never reach production. Meanwhile, boring and bland models seem guaranteed to arrive in dealerships, contributing to the morass of uninspired mass-market vehicles.

When the LF-LC was introduced a few years back, it seemed like a no-brainer to bring to market, but intrigued gearheads assumed that would be the last they saw of the design. So it was a pleasant surprise when Lexus announced they were going to actually produce a version of the LF-LC concept, eventually producing both the LC500 and the LC500h hybrid version. Also surprising was how similar the new car looked to the original concept, as most cars moving from concept to production experience drastic changes, often removing the very elements that are most appealing. The LC500 manages to maintain the lines from the LF-LC concept while incorporating certain design elements (like the tail lights) found in the current Lexus model range.

We really shouldn’t have to celebrate an auto company for actually producing a concept car, but considering how many Mercedes, BMW and Audi concepts have appeared at global auto shows to excite, only to disappoint when the project is cancelled, we should be excited by the willingness of Lexus to take a chance, and the ability of the Japanese automaker to follow through on such an ambitious project.

Lexus has recent experience with bringing a class-challenging sports car to market. When the company released the LFA in 2010, it was a shock to the system for the supercar elite. Ferraris, Lamborghinis and McLarens seemingly cowered in fear from the $300k+ supercar (hypercar?) that sounded more like a Formula 1 racer than its road-going peers. Notoriously critical automotive journalist Jeremy Clarkson, of Top Gear and now The Grand Tour, claimed the LFA was the best car he’d ever driven and numerous other experts agreed. Lexus had not only defeated the Germans, but the Italian supercar maestros, with the LFA. For those of us who couldn’t afford one of these technological marvels, there was the hope that the engineering achievements of the car would make their way into the brand’s more affordable models; that one could eventually get the same seamless gear shifts or high-revving engine the LFA provided.

That never really happened. The LFA was a step (or three steps) too far ahead of the rest of Lexus’ models for any of the advancements to realistically trickle down to the more affordable options. That’s what is so exciting about the LC500 (and the introduction later this year of the other new flagship for Lexus, the LS500). Unlike the carbon fiber and super-high-revving engine of the LFA, the weight shifts and near-perfectly tuned engine of the LC500 can be reasonably expected to show up in the RC, GS and IS lines in the near future. The lessons learned from the LC500 will be beneficial to a wide range of potential Lexus drivers, not just those at the high-end of the price range.

If the Lexus engineers can also find a way to make their more affordable models feel lighter and more responsive as they did with the LC500, it will truly be time for the German powerhouses to worry because they will have surrendered the main advantage they’ve held over their Japanese competition. The LC500 is a triumph for Lexus, and it is a thrill to drive, but the real victory will be determined in coming years as Lexus tries create similar disruptions in other vehicle categories. If they succeed, they just might come to dominate both in the marketplace and on asphalt.