The First-Ever Lexus Yacht Is Here, And It’s Spectacular 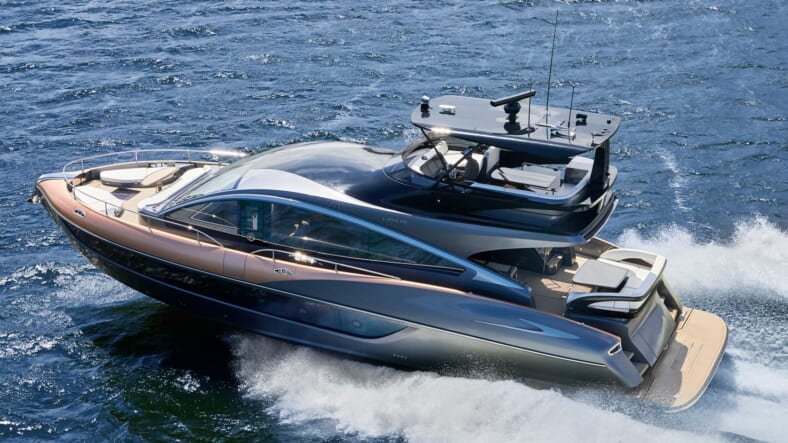 The Lexus LY 650 luxury yacht has finally made its global debut with even more power and over-the-top amenities than was initially promised when the concept was unveiled last year.

Its dynamic hull was constructed from carbon fiber-reinforced polymer (CFRP) for lightness and high rigidity, ensuring to a comfortable ride at high speed. Soundproofed sandwich panels built into the main walls further enrich the passenger experience.

Automotive-inspired style has crept its way into the design as well: a coupe-like roofline  and accentuated aft hips both emulate road-going Lexus vehicles like the elite RCF.  Metallic accents on the bow, side windows, and an L-shaped air intakes give the LY 650 a distinctive look among the populated superyacht market.

From the flybridge, twin 1,000-horsepower Volvo Penta IPS1350 engines can be helmed with an array of pilot-supported functions, including joystick control, fixed-point position holding and an auto-flap feature.

The salon below boasts couches, dual-captain’s seats and an optional custom Mark Levinson surround sound system for concert-like audio quality. An open-air deck finished with custom fittings is located on the bow, serving as another way to take in the open water.

Further below is an interior designed using the Japanese “omotenashi,” a hospitality-based philosophy that “anticipates and fulfills people’s needs.” A soothing white space provides a sense of openness, while curved lines and “creative” lighting produce an inviting aesthetic. Three staterooms, each with a private shower and bathroom, can sleep up to six.

For an even closer look at Lexus’ first-ever yacht, check out the LY 650 at the Fort Lauderdale International Boat Show from October 30 to November 3.