The Japanese automaker isn’t playing around. 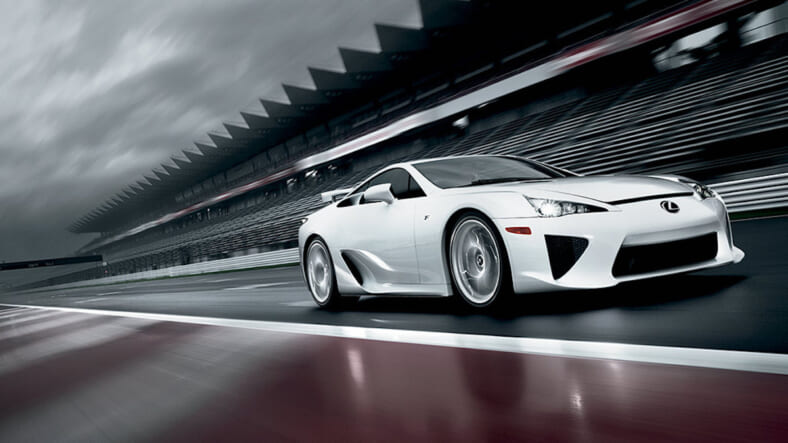 It was a peaceful day in the German countryside in the late summer of 2011, with birds chirping in the trees overhead and only a muted, rumbling whir in the distance. At the Nürburgring, the mecca of automotive testing and development, all was calm. But what began as a distant rumble soon edged closer and turned into the sharp-pitched shriek of a high-revving
Formula 1 racecar approaching at speed.

As the thunder finally peaked and the car crested the ridge, streaking toward the final set of turns on the notoriously difficult—and dangerous—racetrack, it became clear this was no routine run: The car set the record for a production vehicle, clocking in at an astounding seven minutes and 14 seconds. In a twist, this wasn’t a Formula 1 car, or a specialized Ferrari stripped down for track days. Instead, it was a Lexus LFA, the crowning glory for the design team, which had set out to reshape what people thought of when they heard the brand’s name.

Performance of this kind is not what most observers would expect from a Lexus, a company known for luxury, comfort, and reliability, if not necessarily excitement. Automotive journalist and Top Gear host Jeremy Clarkson once described the experience behind the wheel of a Lexus as similar to “sitting in a bucket of warm wallpaper paste, reading a Jane Austen novel.”

Brian Bolain, Lexus’ general manager of product and consumer marketing, who was with Lexus at its conception and rejoined the company again in 2005, doesn’t dispute this appraisal. “Lexus, for years, has been known for being very strong in customer experience, luxury, dependability, and value,” Bolain says. But giant changes are under way. “As time has passed, it feels like in order to be ‘tier-one luxury’ in automotive, performance is now among the costs of entry. In the early years, there was no performance angle that they were leaning on. Now, all that has changed. I would say now we recognize that one of the boxes we have to check, something at which we have to demonstrate skill, is performance.”

In the mid-1980s, the Toyota Motor Corporation struggled to push into the elevated range of luxury vehicles. And while the Toyota name had become a global catchword for economy, toughness, and reliability, it couldn’t catch the attention of the affluent luxury buyers the company needed for these new luxury models. While the early attempts from Lexus, the ES 250 and the LS 400, were critically well-received, performance was practically nonexistent and Lexus began earning a reputation as a comfortable car in which to ride but a boring car to drive.

This reputation, and the company’s priorities, which had always eschewed performance for comfort and luxury, stuck for a decade and a half. The cars were heavy and lacked agility, leading to chronic understeer and a clear gap in performance between Lexus and its German counterparts.

Then came Akio Toyoda, the son of Shoichiro Toyoda and grandson of Toyota founder Kiichiro Toyoda (both were company presidents), who took control of Toyota in the new millennium and quickly began stamping his mark across the brand.

Toyoda is a speed freak—a racing enthusiast with high octane pumping through his veins. Even in his 60s, he’s raced (under a pseudonym, Morizo) in some of the most challenging auto events in the world, like the ADAC 24 Hours Nürburgring, and has taken a hands-on approach to shaping the present and future of the luxury division of his family’s empire. Now Toyota’s president, Toyoda has also insisted on taking on additional roles at Lexus, namely those of chief branding officer and, most important, chief master driver.

Toyoda’s arrival was timed to perfection. Unknown to much of the company, a small team of performance-crazed engineers had started a side project that would eventually become the LFA concept. A vehicle capable of competing against the global elite of supercar manufacturing, the LFA was a dream at best, a waste of resources at worst. At least until Mr. Toyoda, who at the time sat on Toyota’s board of directors, put his weight behind the project. He believed that in order to change public opinion—and the company’s very own DNA—a radical and bold project was necessary, and the LFA was the perfect opportunity.

The LFA showed the world what the design and engineering teams at Lexus could achieve. The car was so advanced compared to the rest of Lexus’ offerings that not much of the LFA’s cutting-edge technology could be directly transferred to the automaker’s more affordable models. Yet with the release of the F and F Sport lines, it’s clear that the LFA inspired other Lexus vehicles to raise their performance and injected a level of excitement throughout the brand.

With the expansive introduction of the F  category of vehicles, Lexus has achieved a new balance between the luxury that buyers demand—a foundational element of the brand—and the performance they want, and that can be found throughout the F model cars. Luckily, at this crucial moment, the company is releasing two new flagships—the LS 500 and LC 500—that will help define Lexus going forward and provide the purest examples of the new balance the brand is cultivating.

“The LS is the flagship of the Lexus brand,” explains LS chief designer Koichi Suga. “More than any other model, it embodies the history and image of Lexus and serves as a symbol for everything the brand stands for.” The LS 500 is the fifth generation of the original Lexus luxury sedan, and the first since the original, back in 1989, to be completely rebuilt from the ground up. It begins with the all-new GA-L platform, the company’s best and stiffest chassis to date, and continues with a recently developed, 3.5-liter V-6 engine built specifically for the LS, complete with two turbochargers and with an output of 416 horsepower.

But the LS is truly enhanced through a focus on the concept of takumi, the Japanese ideal of craftsmanship. According to Bolain: “The most skilled people that work in our factories or design offices are called takumi (artisans). Takumi simply means you are a master at whatever it is that you do. It takes something like 60,000 hours of experience in your field to become known as a takumi within the Toyota/Lexus culture. It turns out we even have takumi drivers.”

This level of craftsmanship can be seen within the interior. A three-dimensional pleated pattern of fabric, inspired by origami, lines the doors. Special glass with delicate patterns carved into it, called kiriko cut, highlights the door handles, while takumi woodworkers slice and veneer real wood herringbone designs into exquisite mosaics. If the LS’s exterior—with its speedback rear section, elongated wheelbase, and coupeesque shape—convey aggressiveness, the car’s interior is meant to remind riders that Lexus is still a luxury brand first.

While the LS affirms Lexus’ luxury bona fides, it’s the LC 500 that will likely serve as the true example of the new Lexus. The sports coupe achieves a harmony of performance and comfort, serving as a symbol of the balance being cultivated across the Lexus brand and its model range. With a price starting at $92,000, it’s not cheap, but it is affordable compared to its competition. Indeed, the LC 500 competes with supercars that cost well into the six figures.

For example, the Japanese coupe recently held its own in performance testing against a 2017 Aston Martin DB11, which costs more than twice as much. But the genius of the LC 500 is that for that price, you actually get what amounts to two cars—or at least, a car with multiple personalities.

The Janus of vehicles, the LC 500 has two faces. The first is the calm, tranquil facade of a traditional Lexus—smooth over bumps, posh and luxurious within the cabin, and with a reliability uncommon among other sports cars. The other face is like the devil’s, pushing drivers to the edge of their limits as they shift the variable driving modes into Sport S or Sport S+ and flick the left paddle-shifter to drop a gear and spike the tachometer. The engine flexes its muscles, the suspension stiffens, and the acceleration reaches whiplash-inducing levels in the straights while the chassis provides those vicious lateral Gs in the corners.

Drive the LC 500 long enough and you’ll likely find a middle ground that best suits your driving style, but it’s wonderful to know that each morning you can jump into an über-luxury sedan or a high-performance supercar, all within your one-car garage.

This is a fascinating moment at Lexus, which is discovering whether it can alter its own DNA and change course without abandoning what led it to success in the first place. Much of the outcome will hinge on the LS 500 and LC 500. Bolain is proud and markedly excited about what is happening at the Japanese automaker. “It’s the first time in the history of the brand that we’ve had two brand-new flagships at the same time,” he says. “It makes it feel like Lexus is on a path, that it has some direction, that there’s a vision for Lexus, undeniably, and these two cars together really spell it out.”

This article appears in Maxim’s January/February issue. Be sure to subscribe so you never miss an issue.