This killer coupe dominated the roads Down Under. 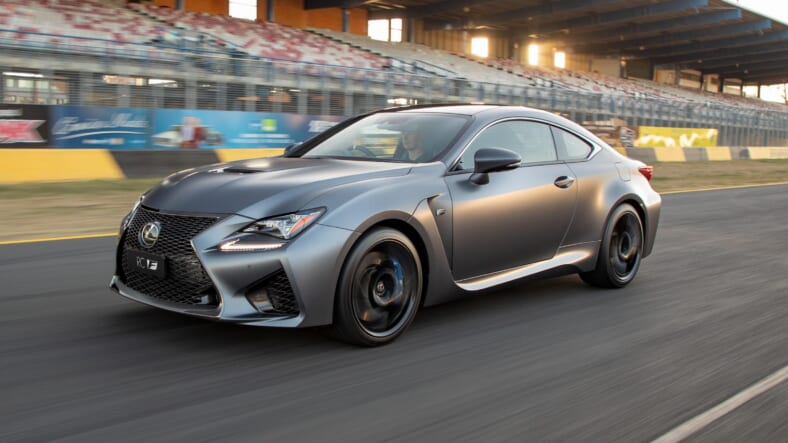 Thirty years ago no one thought the Japanese could match the Germans in the luxury car market. They were wrong. In just three short decades Lexus (under Toyota) has created an automobile brand to rival Mercedes-Benz and BMW, both of which are a century old, and both considered the best luxury car makers in the world. For Lexus to have achieved this status in such a short amount of time is a feat unheard of in the automotive industry.

Next year also marks a milestone in Lexus’ short but impressive history – the 10th anniversary of the elite RCF model.

First, let’s clarify the nomenclature. The RC stands for “Radical Coupe,” a term meant to distinguish the model in both design and engineering, while the F represents the high-performance division of the brand and comes from “Fuji” Speedway, the racetrack near the iconic mountain where Lexus develops and tests its racing cars.

For those unaware, Lexus has had class wins and/or podium placements at, namely, the 24 Hours of Nürburgring – one of the most prestigious endurance races on earth – in an F-series car, so an F-badged Lexus is definitely one of pedigree. Some have said F also stands for “flagship,” which isn’t wrong as an F-designated Lexus is the top-of-the-line. So, no matter how you define it, an F Lexus is an indication of speed, luxury and prestige.

In the same class as the Mercedes-Benz C63 AMG and BMW M4, the Lexus RCF is one serious performance machine. It’s powered by the most powerful V8 engine the company has ever built for a production vehicle – a 5-liter, naturally aspirated motor providing 467 horsepower with 389 lb-ft of torque. Top speed is 168 mph with 0-60 attained in 4.4 seconds.

The engine is mated to and complimented by an 8-speed transmission that employs Lexus’ proprietary G-Force Artificial Intelligence Shift Control. What this nifty bit of technology does is use the vehicle’s G-force sensor to monitor how aggressively the vehicle is being driven and adapts the transmission shift points accordingly. The result is a very sporty and thrilling drive that adjusts the throttle on downshifts and holds the gears through corners to maintain optimum control.

What’s also an incredibly cool feature is the engine’s audio that’s enhanced by what Lexus calls the Active Sound Control. Acknowledging that a car’s mechanical symphony is an essential element of the driving experience – as important as any performance aspect, the feature electronically boosts the sound in the cabin via the speakers, which can be turned on or off per the occupant’s preference.

Thanks to this special exhaust system, the rumbling baritone notes emitted from the signature stacked exhaust pipes are audible reminders that the RCF is a car built for performance. While all RCF models are endowed with these physical and sensory characteristics, what sets the new 2019 10th Anniversary Limited Edition apart is aesthetics.

All 240 examples (each with an engraved number plaque) that are to be sold in the US – one for each Lexus dealer in America – will be painted in matte Nebula Gray with an interior highlighted in blue – blue leather seats, blue accented shift knob and steering wheel, and blue instrument panel hood. And behind the 19-inch black polished BBS wheels sit blue Brembo brake calipers. The effect of all these royal blue accents against the dark matte gray body is a gorgeous, if unexpected, combination of modern looks that are somehow both understated and arresting.

Negotiating the congested city streets of Sydney, Australia in a new RCF, the car behaved comfortably, nimbly and mannerly. And with the steering wheel on the right-hand side, having a non-temperamental performance car with plenty of throttle response was a welcome relief for this American driver.

In hindsight, driving on the opposite side was the original expression of Lexus, at least spiritually, since Japan too drives in the same configuration as Australia. My only disappointment, however, was that Australian roads rules prevented me from exercising the Lexus to its true athletic expression.

With Sydney in the rearview mirror, the drive south along the coast was pleasure driving at its best. Forests of gum trees, then expansive clifftop views of the ocean, and then the famous, Instagram-saturated Sea Cliff Bridge – the one that clings to the cliff out over the ocean through a series of two S-curves – was pure magic.

Leaving the coast and its crashing waves and heading up over the mountains through The Man From Snowy River-looking landscape, complete with kangaroo, echidna and, best of all, wombat crossing signs, the road-hugging RCF was like dreamtime.

With an interior as plush as any premium European brand, it would’ve been easy to forget I was in a Japanese sportscar, but the perfectly taut steering – not too tight, not too loose – intuitive controls, immediate reserves of speed, excellent handling and that sonorous exhaust were constant reminders that this was no ordinary coupe.

As a Lexus executive explained to me, takumi, or the Japanese art of beauty craftsmanship, is an inherent ingredient the F-line of Lexus. Of the 7,700 workers at the Lexus factory, there are only 19 takumi craftsmen, each with a minimum of 25 years of experience. These car senseis, so to speak, apply and oversee the meticulous attention to detail involved in the creation of each automobile.

At first thought, this all sounded like a nice marketing ploy, but when I reflected on the Japanese and their cultural drive for perfection – in everything from samurai sword making to their scotch whiskies that are now winning more international awards than Scottish scotch – it made sense and became evident sitting behind the wheel. There really is a simplistic perfection in each aspect of this car.

With that in mind, I couldn’t help but wonder how Lexus could imbue this car with more “Japanese.” I mean, when you sit in a BMW it feels very German and when you sit in a Maserati it exudes Italian. So what is “Japanese” and how could Lexus impart more of its birthplace into this automobile of understated precision? Is it some sort of wabi sabi incorporated into the execution of perfection? I don’t know. I’ll leave that to the designers and masters of takumi.

All I know is that as I’m driving the RCF through the countryside of New South Wales with the Active Sound Control on, feeling the Michelin Pilot SS tires grip the asphalt, I’m not left wanting for anything. Oh, and did I mention that Guess model and Aussie native Simone Holtznagel was along for the ride?

How do you say takumi in Australian?