Champion driver Caesar Bacarrella will put the pedal to the metal at Florida’s Homestead-Miami Speedway on Saturday. 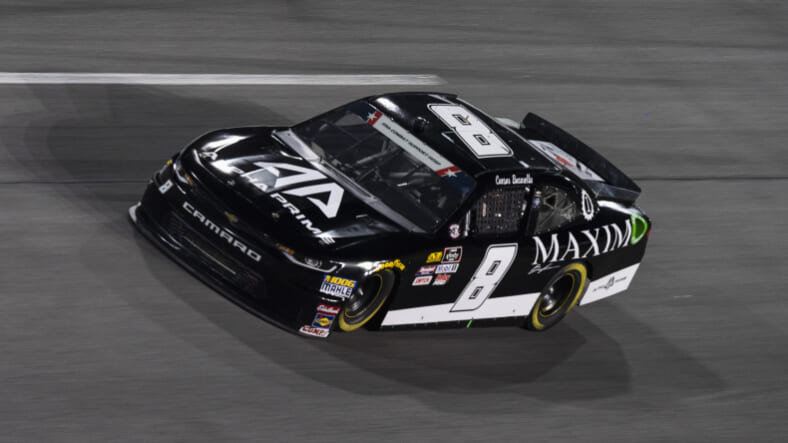 Maxim’s first foray into the high-octane world of motorsports ended in great success in 2018, with the Squadra Corse Garage Italia Ferrari 488 GT3 winning the GT Sprint X-Class Championship in September.

With drivers Caesar Bacarella and Martin Fuentes sharing duties behind the wheel of the Maxim-sponsored Ferrari, the team claimed first place in in three out of five Sprint races and won all five Sprint X races en route to claiming the coveted series’ wreath.

Now, the same team has decided to compete in NASCAR—the most popular racing series in America. Tapping Bacarella to once more pilot their vehicle, the crew will test its skills at Florida’s Homestead-Miami Speedway on Saturday.

“We branched off from our Ferrari team with Caesar to try a little bit of getting into NASCAR, and evaluating that for next season,” explains Ronnie Vogel, who co-founded the team with Lapo Elkann, the grandson of Italian industrialist Gianni Agnelli and brother of current Fiat Chrysler president John Elkann.

“It’s the same team, same driver, same sponsors—we’ll see how we do in this race, and if we run a full season as our team in NASCAR next year.”

“Winning the Ferrari series, I was very excited about that because it was our first year out as a team,” says Bacarella. “It’s hard to get the formula to work perfect with everybody together, two new drivers together with a whole new team.

“But our formula with the crew chief, we all understood each other, our driving style between me and Martin were great, and then we just dominated our class. You couldn’t ask for anything better.”

Of course racing a road course, as Bacarella did in the Ferrari 488 GT3, is worlds away from the ludicrous speeds of an oval track, but the American driver is ready for the challenges of the Xfinity Race Series.

“With NASCAR it’s all momentum where you keep the momentum up, whereas road racing you’re stopping-going-stopping-going. It’s actually a night and day difference.”

The Florida-born driver has won over 160 races and numerous championships throughout his career, claiming victory in variety of different series, so he has experienced the rigors of many varied schools of motorsports. But still, Bacarella is hesitant to divulge which style he prefers.

“That’s a trick question,” he laughs. “I love road racing, it’s more fun as I’m driving the car. But NASCAR is more exciting due to the fact that it’s the stage you’re at—it’s more of a Super Bowl, you know what I mean? The attendance, the fans and everything, it’s a way bigger event.”

So Bacarella and Squadra Corse Garage Italia’s goal is win at Homestead on Saturday, and then next year run the full NASCAR Xfinity series. But don’t think Vogel, Elkann and company are stopping there. The team, brimming with recent success, is setting its sights at the top.

“Who knows, maybe we jump head-first into the Monster Energy series next year,” says Vogel, clearly confident in his team’s chances. “It’s definitely a possibility. We’re also evaluating running at the 24 Hours in Daytona.”