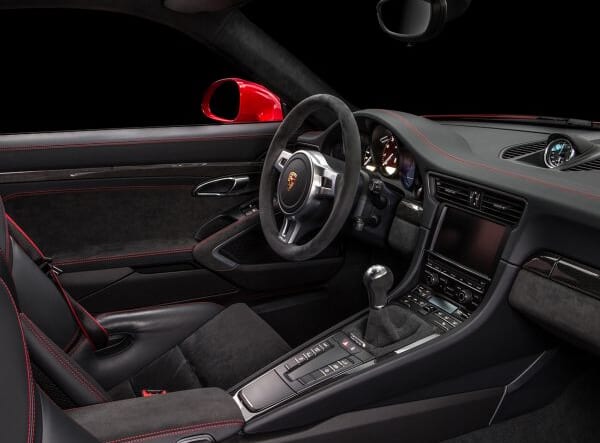 The vintage Porsche 911 market is snortingly, hoof-stompingly bullish. Search your favorite year and model of 911 on Hagerty Insurance’s helpful website and odds are the trend graph will look like a cross-section of Aspen’s steepest Black Diamond. A lowly 1989 3.2 Carrera Coupe? Fifty thousand dollars, and climbing. An early 911 Turbo, the ill-tempered, ditch-inclined widowmaker with a gawky US DOT bumper-induced underbite? One-hundred and forty thousand dollars, and most are brown. The original racer, a 1973 911 2.7 RS? About one 3.2 Carrera away from $1 million, or just under a 700% increase from a decade ago.

So, in a strange twist, if you want a top-performing, vintage-style (manual transmission, clean lines, rear-drive, naturally aspirated) 911, and a value, your best bet is buying new. Specifically, the 2015 911 GTS, the over-achieving middle-child of the 911 family: yours, fully loaded, for $115,195. Faster and rarer than a Carrera S, but without the boy-racer wings, teeth-chattering suspension and lap-time orientation of a GT3, the GTS is the spiritual successor to cars like the 1969 911 S or 1994 911 RS America: coupes built for ultimate experience on the road, not outright speed.

It does tread awfully close to the speed demon of the family: for $15k beyond the GTS’s base price sits the GT3, an all-out racer with a driveway-kissing front splitter and a wing large enough to host a bratwurst picnic. The GT3’s 475-horsepower engine and PDK ‘box gets it to sixty a second faster than the GTS (3.3 seconds versus 4.2). That finger-snap of a difference is what separates GT3-people from GTS-people: the former are timing their laps, while the latter know that most tushes can’t tell, and on the street, wouldn’t you rather fly wingless, with your right hand on the stick shift, not the paddle?

If so, read on, because the 911 GTS is the ultimate Carrera: the most sensual of the road cars. It’s a dialed-in, stroked-up Carrera S optioned as standard with just the features Porsche’s engineers crave most. A standard power pack includes a better-breathing intake manifold, polished intake ports and more aggressive cam settings for a strong 430 horsepower. A standard 10-mm lower suspension (PASM, Porsche’s adjustable suspension system) and sport exhaust mean the GTS can be a murmuring softie on lumpen streets (we drove a GTS coupe up a dirt road in exquisite comfort) as well as a screaming race-sled when the road smooths. (Note: the murmur/scream dichotomy isn’t just artsy talk. The GTS has two distinct voices, a powerful, muted roar that flips, suddenly, thrillingly, into a keening soprano above 6000 rpms.) Active engine mounts keep the GTS, like the GT3, feeling like a car whose drivetrain isn’t just bolted to the frame but folded in, like egg-whites into soufflé batter, to create an homogeneous, springy whole.

Visually, the GTS matches its performance credo: maximized, tightened, and clean. The silver trim in lower models is swapped for a luscious gloss black, and dark-painted single-lug wheels from the 911 Turbo S (the best 911 wheels, to our eyes) squeeze in under standard Carrera 4-style bulging fenders (to accommodate the wider track). The Sport Design mirrors are more aerodynamic (look for the “v”-shaped mounts), and the all-black engine louvers look positively hot-rod. The result is stormy, hippy, and taught, with a sharpness not seen since the 993 Carrera S—do your eyes a favor and do a Google Image search if you’re unfamiliar with Porsche’s chassis codes. A small wing is integrated into the rear deck and emerges at 70 mph, but at lesser speeds, the profile of the GTS is as clean as the first 911 that rolled out of Zuffenhausen. Plus, no wing means you’ll likely escape the attention, and red-light revving come-ons, of competitive guys in WRXs and twin-turbo Supras.

Inside, standard Sport Plus bucket seats are incredibly low (making for ungainly entry, even for young bucks), and most surfaces are covered in gunmetal-grey Alcantara or anodized black aluminum trim, which tilts the vibe of the interior away from the exterior’s smokey-eyed reserve and towards the ashy shou-sugi-ban look of a Japanese steakhouse. And, like all 911s equipped with the Sport Chrono package, the GTS has a shiny horological wart glued to the dash. Above all, though, everything is of ultimate quality, as sturdy and bulletproof as the dash of a Mercedes W124, and the low seats and high cowl mean once you make it down in the seat, you feel slotted in: the final piece of the machine.

All these tweaks and upgrades, piecemeal though they may be, turn out one hell of a sports car. Zooming through the oxbows of Los Angeles’ Pacific Crest Highway, the GTS’ super-precise steering, magnificent brakes and heart-wrenching soundtrack encouraged ludicrous speeds for a serpentine, mountain road whose obstacles include around-every-corner drop-offs and herds of stringy-legged Sunday bikers. We were possessed by a spirit unbothered by close calls (our apologies to the Armstrong-aspirers—dry-cleaning neoprene isn’t cheap).

It’s a confidence machine. The GTS is a car so poised that it encourages rascally behavior—the automotive equivalent of a prim, clean-frocked cousin whose composure you yearn to crack. After the GTS rounded three acutely-angled corners at high speed with not so much as a shuffle (credit to the wider track and the Porsche Torque Vectoring system which, in conjunction with the mechanical limited slip differential, shuffles power between the driven wheels [2]), we kept the pedal pinned a mite longer into the turn, letting the flat six’s battle cry echo a little farther, and still the GTS drove as if it were glued down with army-grade adhesive. Unless steered off a cliff, the GTS will not misstep.

Somehow, even with all that speed and precision, the drive is of the old school. The naturally aspirated engine doesn’t have the torque of a turbo, and so begs to be taken above 6000 rpms, where the power lies and where the tenor of the exhaust flips from urgent to cataclysmic. Though the Porsche 3.8-liter six is precision itself, there’s still a fluttering, lumpy sound to the GTS’s idle that lets a listener know this ain’t no electric appliance—it’s a automobile motivated by thousands of contained explosions and hundreds of whirring, revolving bits of red-hot aluminum, titanium, and steel. The action of the seven-speed manual is lighter and more positive than any other 911, but still delivers your hand the thrumming, metal-on-metal zing that the PDK wunderkind can’t match. The fat rear tires and typical 911 traction (the engine, of course, sits over the driven wheels) mean superb grip, but this is still a rear-drive Porsche 911. With enough savagery at the wheel, oversteer is still very much on the menu, especially if the tarmac is covered in a dusting of southern California mountain rock.

The GTS isn’t a numbers car. A base GT-R or Corvette will clean-up in a drag race, and though the GTS’s top speed is a breathtaking 190mph, a used Bentley Continental Flying Spur can do better. It will win you no bragging rights. Instead, the GTS is superlative in the same way as its forebears of the sixties and seventies: an ultimate, voluptuous pleasure to drive. The reason people are topping one another’s bids on those vintage 911s isn’t just their beauty, but the intangible pleasure they provide as instruments. All that speculative Porsche money is chasing the thrill of the purest, most mechanical driving experience.

The GTS has it. In a way that few sports cars, even at the top end, can match, the 911 GTS is a vibrating, singing, screeching thing, as alive as any creature bounding through the Black Forest next to which the Porsche is built. The GTS is at once beautiful, beautiful object (the wheels, the louvers, those squat, muscular flanks) and subject, with a boisterous personality ripped from a 1969 911 S.