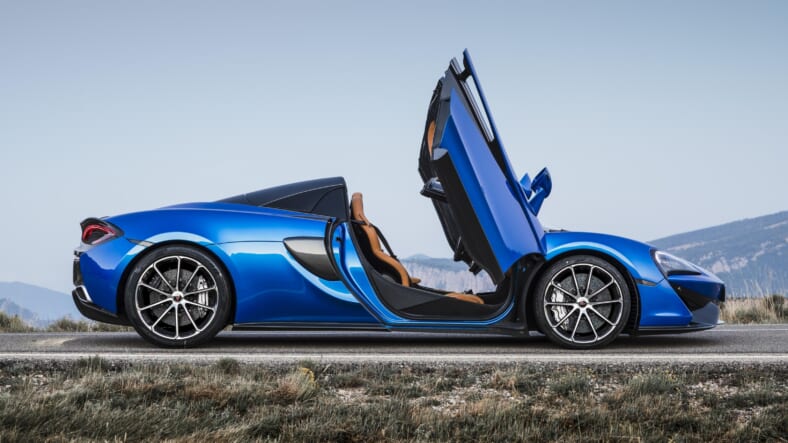 “That’s the starter McLaren, right?” That was the question from the young man at the Saturday morning Cars & Coffee when I rolled up in the brilliant Vega Blue McLaren 570S Spider with the top down.

“The McLaren 570S Spider is the most attainable McLaren Spider to date and adds yet another dimension to the McLaren Sports Series family, stated McLaren Automotive CEO Mike Flewitt.

“This is a convertible without compromise; its mid-engined layout and carbon fiber MonoCell II chassis guarantee the same thrilling dynamic performance and exceptional driver involvement enjoyed in a 570S Coupe, but with the added attraction of a retractable hardtop that delivers the extra exhilaration of roof-down motoring.”

But there are more things than just a stiff price tag that ensure that this brilliant machine is nobody’s ‘starter’ sports car.

Every McLaren is built on an all-carbon fiber MonoCell II chassis tub, just like the MP4/1, the world’s first carbon fiber Formula 1 car that McLaren introduced in 1981. What does set the 570S Spider apart from costlier models like the 720S we tested previously, is that the 570 uses conventional steel coil spring suspension, while the 720S employs McLaren’s active hydraulic suspension.

That means that the 570’s ride isn’t quite a cushy as that of the 720, but its handling is as crisp and responsive as anything on the road.

The 570S’s bodywork moves more air than the shop vac you use at the car wash to get the Cheerios out from under your car’s seats. There are scoops, ducts and vents everywhere, each of them tasked with either helping the 570S slide through the air effortlessly, to use the air to cool the car’s mighty 562-horsepower 3.8-liter twin-turbo V8 engine, or to help stick the car to the ground more securely.

At the track, grip depends significantly on the temperature of the tires, and the 570S Spider ensures that its driver knows the exact temperature of its tire for the same reason. The display on the dashboard also shows the car’s forecast days of  battery life when parked, because all of its electronic systems draw power even when the car is turned off.

And returning home to find a dead car battery in the airport parking lot has more downside than running your phone battery dead, so McLaren lets drivers know how long they can safely park the car without fear of stranding.

The 570S Spider’s engine barks with an authority that leaves no doubt about the car’s ferocity. This is amplified by McLaren’s optional $5,760 MSO Defined Titanium SuperSports Exhaust, which is louder and lighter than the standard exhaust.

Because the point of having such a car is to appreciate the experience, an extravagance like a ~$6,000 muffler is worthwhile because it intensifies the value of the other ~$200,000 already spent.

However, when the Spider is motoring quietly along in 7th gear, the available $2,280 Bowers & Wilkins 12-speaker audio system is available for alternative auditory sensations.

The pure accuracy and precision of the McLaren’s steering is difficult to describe. But seemingly regardless of speed, the 570S Spider always goes exactly where it is pointed, and it conveys to the driver through the steering wheel that of course it is doing what you wanted it to.

This is at least partly due to the fact that, while the rest of the industry has shifted to slightly vague electric power steering, McLaren continues to rely on hydraulic steering assist because of its superior road feel.

The 570S Spider’s 562-horsepower 3.8-liter twin-turbocharged V8 powerplant propels the topless beauty to a top speed of 204 mph! We didn’t quite experience terminal velocity during the McLaren’s visit, but we did experience the car’s squirming, sizzling sub-3.5-second 0-60 acceleration.

Just as all McLarens are built on carbon fiber chassis, so they all also employ carbon ceramic brakes for maximum stopping power. And while this technology can be squeaky and grabby in other manufacturers’ models (the Ferrari 488 comes to mind here), the McLaren’s brakes are utterly civilized and unremarkable in daily driving.

But when hammering through curves, the Spider’s stoppers shed speed with tire-howling effectiveness.

Other supercar makers reserve their unorthodox door hinges for higher-end models, but unlike the Lamborghini Huracan, with its conventional doors, the 570S Spider employs the crowd-attracting flip-up dihedral doors, with all their attendant drama.

With the retractable hardtop roof up, the 570S Spider is virtually indistinguishable from the hardtop coupe 570S. But the top goes down, which makes everything better.

And it lowers in just 15 seconds, even while driving at speeds up to 25 mph.

‘Starter McLaren’ is an oxymoron. Duh.