The All-New McLaren 600LT Just Made Its Stunning Debut

Watch the eye-popping supercar in action. 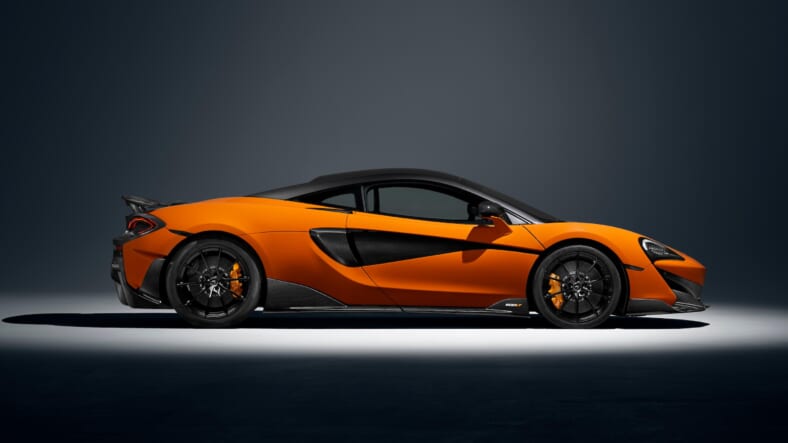 Turns out it’s more than just a pretty face.

The perfectly proportioned McLaren 600LT showed off what a vehicle with 592 horsepower in a super lean body is capable of at its worldwide debut at England’s legendary Goodwood Festival of Speed.

Let’s just say there was some smoke involved.

Touted as the “lightest, most powerful and quickest” road-legal Sports Series McLaren ever, the 600LT is made to move. Here’s more from McLaren:

With the engine management system of the 3.8-liter twin-turbocharged V8 recalibrated and less back pressure from a top-exit exhaust system that is even shorter and more extreme than that of the McLaren Senna allowing the engine to breathe more freely, the 600LT can call on peak power of 592bhp at 7,500rpm and a maximum torque output of 457lb ft at 5,500-6,500 rpm.

These outputs deliver astonishing levels of performance: 0-62mph takes just 2.9 seconds, matching the acceleration of the revered McLaren 675LT Super Series model (0-60mph in just 2.8 seconds). 0-124mph is achieved in a remarkable 8.2 seconds and the 600LT can continue gathering speed to a top speed of 204mph.

As for the “Longtail” designation—that’s what the LT stands for—allow McLaren CEO Mike Flewitt explain: “Only the fourth McLaren in more than two decades to be designated a ‘Longtail’, the 600LT redefines expectations of super-sportscar performance, delivering astonishing acceleration and outstanding track cornering speeds with a truly extraordinary dynamic connection between driver and car.”

This being, for the most part, a race car for the street, the stark interior maintains the “leaner is better” philosophy.

The cockpit of the McLaren 600LT exemplifies both weight reduction and a driver-focused environment. Lightweight Alcantara trim material is used extensively throughout and the absence of carpet in the driver and passenger footwells and beneath the seats saves 12.6lbs, while also exposing the carbon fibre beauty of the MonoCell II chassis construction.

The glovebox has been removed and the door pockets replaced with lightweight nets, while air-conditioning, satellite navigation and an audio system are all available as no-cost options, not being fitted as standard. Carbon fibre Racing Seats, first seen on the McLaren P1™ and subsequently used in the McLaren 675LT, are standard-fit and save a remarkable 46.3lbs.

Hope you didn’t have your heart set on carpets and a glovebox!

What will all this cost you? Available to order now from McLaren retailers, the 600LT Coupé starts at $240,000.

That cost, however, includes a track day at a race circuit under the tutelage of expert driving instructors.

We think you’re gonna need it.