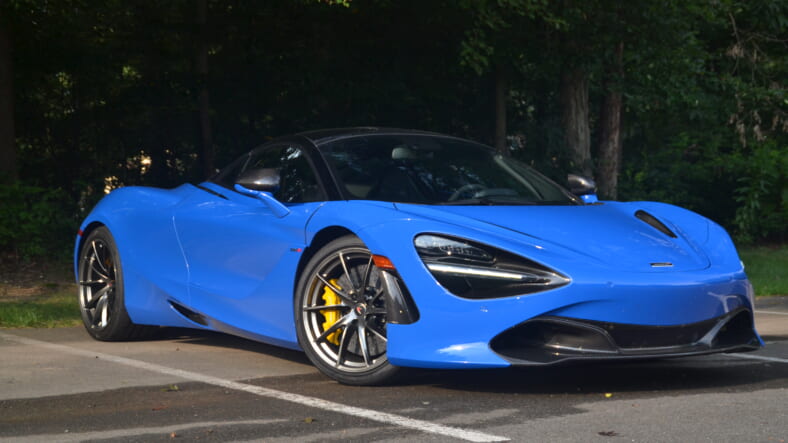 To read the frothing reviews of the new McLaren 720S in the uncritical enthusiast press, one could easily conclude that McLaren Automotive‘s new “Super Series” model is the pinnacle of flawless performance perfection, but we are here to alert you that the 720S sufferers from a disastrous flaw: it has atrocious satellite radio reception. You’ve been warned.

Otherwise, well, yes, the 720S is the mechanical embodiment of the kind of clever British engineering that helped win World War II with radar and code-breaking and other derring do.

Perhaps this is what earns the 720S’s family within McLaren the name “Super Series.” The company also has a “Sport Series” of the 570GT and 570S (cars which are still built on McLaren’s previous-generation chassis design) and the “Ultimate Series.” That includes the out-of-production P1 and the forthcoming model that is referred to by the code name “BP23.”

The sensation of being pressed to the 720S’s driver’s seat on take off doesn’t lie, but there are “super” numbers to back it up: the 720 S vaults from 0 to 60mph in just 2.8 seconds on the way to a maximum speed of 212 mph and the standing quarter mile sprint is dispatched in 10.3 seconds.

The car combines the ferocity of Lamborghini’s Aventador Superveloce with the agility of the Huracan Performante, though it lacks those cars atmospherics. The soundtrack of the 720S turbocharged powerplant, while invigorating, never approaches the song-of-the-angels performances of the cars from Sant’Agata Bolognese.

It starts with the car’s very frame, the Monocage II carbon fiber chassis which is lighter and stronger than the chassis in the previous 650S. Further, it mounts the flip-up dihedral doors with huge cutouts into the roof that make ingress and egress infinitely easier in the 720S than in any comparable supercar. At least, compared to ones with a roof.

Circulating a race track, the 720S benefits from new suspension components that whittles 35 pounds from the moving parts for better ability to follow surface imperfections and from its continuing use of hydraulic power steering assist rather than electric.

Just as analog music recordings better capture the subtly of sound in songs, so hydraulic fluid is a better, more communicative medium for reducing steering effort without filtering critical road feel, which is why McLaren persists in using it despite the hassle of plumbing the system from the power steering pump all the way back at the engine in the rear of the car and the associated weight penalty.

Steering feel is always accurate and effort builds naturally with increasing cornering forces, ensuring the driver knows the status of grip at the front end.

Grip at the rear end is entirely dependent on the driver. The 720S prefers that braking is done in a straight line, with corner turn-in occurring when braking is complete. Trail braking to the corner apex is a good way to test the car’s electronic stability control system, as the rear will lose grip and begin to slide. How much it slides depends on driver skill and/or the settings of the stability control system.

And those brakes! Typically, carbon ceramic supercar brakes perform superbly on the track, with immense stopping force and resistance to fade, corner after corner and lap after lap. But on the street they are normally frustrating, tending to be grabby at low speeds, embarrassing the driver with student driver-grade jerky stops and loud squeal worthy of that rusted jalopy in the next lane.

The 720S, in contrast, has surprisingly high brake pedal effort and longer travel than you’d expect before the brakes bite. This makes very fine control possible at racing speeds and it eliminates the embarrassments competitive cars suffer in around-town driving.

The McLaren’s body lines will cause no embarrassment in around-town driving. The brand has developed its own form language that marks the 720S as the latest evolution in McLaren design, without looking like a wanna-be Ferrari or Lamborghini.

And the large roof cutouts for the dihedral doors will prevent potential embarrassment from 720S drivers or passengers who have a high hemline and want to get into or out of the car without undue exposure. They are also helpful to those whose backs are unhappy about the ultra lightweight one-piece carbon fiber racing seats that were evidently specified by the hoons at Road and Driver magazine for their planned track testing.

Fortunately, comfortable seats are the regular standard equipment, so these track-duty torture racks only afflict people silly enough to specify them.

Our test car was bedazzled in almost $30,000 of carbon fiber dress up parts and $9,400 worth of custom Paris Blue paint. This electrifying variation on French blue is distinctive and escapes confusion with red cars from Italy.

The gorgeous unique paint job contributes to the car’s $284,745 base price ballooning to $378,215. Considering the car’s amazing Super Series performance, we can’t wait to see what the Ultimate Series delivers with the BP23. We’d be happy to drive the 720S until the new megacar arrives, flawed satellite radio reception and all.