Welcome to the most dangerous driver’s ed class on earth. 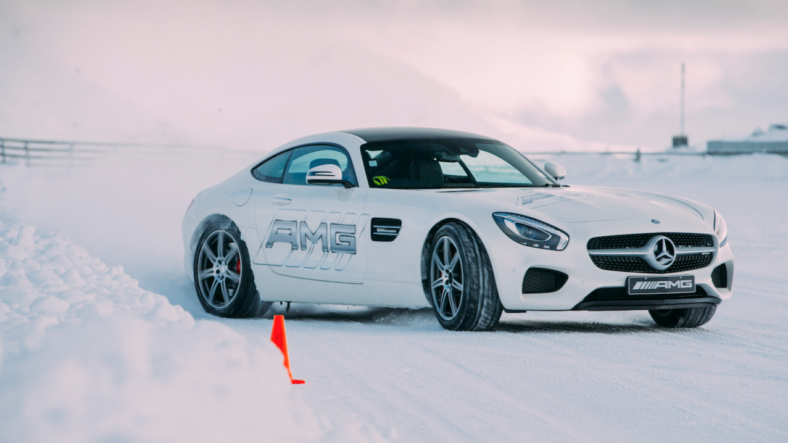 “Hit the gas!” screams my instructor as I struggle to maintain control of the 510-horsepower AMG GT S that is careening toward a frozen, 16-foot-high embankment. Snow and ice fly through the open driver’s-side window as we slide sideways. I hit the accelerator—which, counterintuitively, is the only way to change direction and, hopefully, avoid a $150,000 collision.

Lesson number one of ice driving: Turning the steering wheel doesn’t do a damn thing.

Nestled deep in New Zealand’s Southern Alps, the Southern Hemisphere Proving Grounds is a privately owned vehicular testing facility that covers more than 1,200 acres and includes more than 18 miles of compacted snow and ice tracks. It is the only such facility below the equator and is the ideal location for automobile manufacturers to conduct secret winter testing all year round. The ride in from the closest city, Queenstown, is perilous: about an hour’s journey through mountain roads featuring below-freezing winds and near-zero visibility in a van with snow chains on the tires.

The trainer during my one-day course is Peter “Hollywood” Hackett, a GT racer and the program’s chief driving instructor. (All the pro drivers have Top Gun–like nicknames and the accompanying swagger.) “Gentlemen,” he addresses the group of about 15 international auto journalists, “this is the most fun you’re ever going to have on the road.”

Mercedes offers this experience to owners of AMGs—their most high-performance vehicles—interested in learning the absolute limits of their cars, and specifically, how to execute drifts in extreme winter conditions. Hackett says that even though we likely won’t be going more than 20 mph, hitting that speed on snow and ice will feel like we’re “driving flat out.” He goes on: “It replicates the sensations you see in motorsports or Ken Block drifting videos, but everything happens on a slower scale. When you have a big slide at 200 mph, you don’t get a lot of time to deal with it. Here, you can slide for a solid 15 to 30 seconds.”

The AMG vehicles we’re driving—the C 63 S, the GLA 45, and the beastly GT S—are all extremely powerful and all totally stock, save for the addition of winter tires. As we drive out to an ice flat for our first series of exercises, instructor Chris “C-Mack” McCormack, a tough-talking Aussie, warns me that the power is helpful—if used judiciously.

I grip the thick racing wheel of the GLA 45 tightly, as if squeezing will somehow keep the car firmly on the ground. It’s impossible to see more than a few feet ahead—the 200-odd-foot strip of ice on which I’m maneuvering is all but invisible thanks to the blinding snow. As I spin through figures that in no way resemble an 8, I’m unable to fight my impulses and use the throttle to get my GLA to turn, as C-Mack has instructed.

At first, the feeling of sliding is not fun at all; in fact, it’s terrifying. Imagine that split-second panic you get when you realize you’re out of control, but expand it to an eternal-seeming five to 10 seconds.

After several unsuccessful attempts at channeling my inner Brian Boitano, I move on to the next Olympic-style event—the slalom. The cones are barely visible in the snowy wind, which serves as the perfect excuse for hitting several of them on my first couple of passes. It is on my third go-round that I start to feel the sensation of when to punch the gas to start the slide, and then when to punch it again to change direction—my how-not-to-get- pummeled-by-a-snowbank-and-left-for-dead aha moment.

The trick is applying a physics lesson that Hackett had provided earlier: “Hitting the accelerator is not just about adding power; it’s really about weight transfer.” When you punch on the gas, it induces “torque shock,” which, on a slippery surface, initiates a drift. At that moment, the weight moves from the front to the rear wheels, so as unnatural as it feels, you “steer” by goosing the gas once again, keeping the wheel (and your eyes) locked in the direction you want to go.

“You need to listen to your heart,” C-Mack tells me, “not your head.”

Next we move on to more challenging—read: more dangerous—events. The earlier exercises happened in areas no larger than tennis courts, but now we’re standing on an ice flat about the size of a football field. “All that happens is the crashes get bigger,” one of the instructors laughs as I nervously survey the cones laid out in a massive four-leaf-clover arrangement.

Navigating the clover pattern is a revelation; while more distance and speed do make accidents a much more real possibility, they also provide the time needed to get comfortable with the nonintuitive aspects of sliding. By the time I finish the next event, drifting in larger and larger concentric circles, engines roaring with increasing speed, I’ve stopped listening to my eyes and my ears and now rely solely on the G-force sensor inside me.

It’s now late afternoon, and thanks to the snow-and cloud-obscured sun, it’s become impossible to differentiate between the sky and the land. Everything is white. We’re driven to an ice-covered, 300-yard circular track surrounding a mountain of snow that the instructors call the “big circle.”

Our final test is maintaining a constant power slide around this frozen behemoth at speeds exceeding—wait for it—20 mph. I strap myself in, shut off the stability control, and wait my turn. “Red C 63, go!” someone shouts through the radio, and like a fighter pilot ordered to launch from the deck of a carrier, I’m off. Throttle, slight turn, throttle, straighten wheel, throttle… I’m in a near-constant slide. Then? “Brake, brake, brake!” C-Mack shouts.

As I slowly come to a halt, I see in the distance that one of my fellow students wedged his GLA nose-first into an embankment. He’s fine—the car, too—but the accident reaffirms how difficult it is to master winter driving.

I recall “Hollywood” Hackett’s warning as we began our very first exercise of the day: “The faster you go in these conditions, the more exposed you are to the unpredictable,” he said. “You can’t say, ‘Oh jeez, I wish I was going 5 mph slower.’ It’s too late.”