This Mercedes Pickup Truck Is For Real, and It’s Coming Next Year

Turns out them German boys can build themselves a truck. 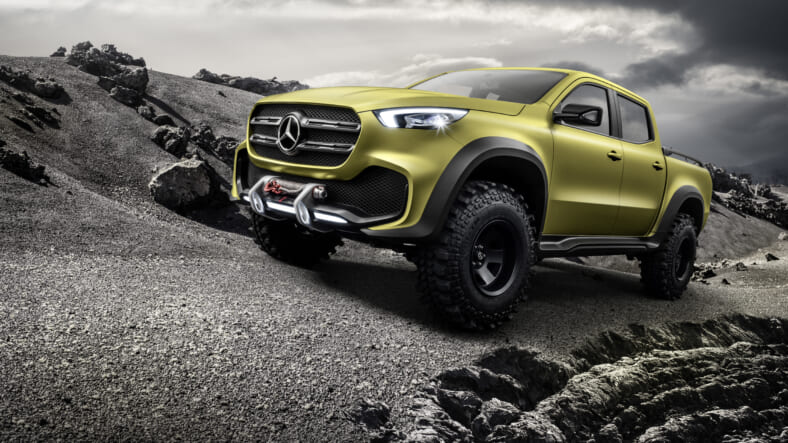 As if the the Loch Ness monster were netted and dragged ashore in front of a swarm of cameras, the mythological Mercedes-Benz pickup truck crossed from rumor to reality today when the Three-Pointed Star pulled the cover off this matte green off-road bruiser, dubbed the X-Class.

The vehicle shown is a concept, as evidenced by its cartoonishly knobby tires and winch, but Mercedes said that the production model will reach dealers by the end of 2017. Those won’t be U.S. dealers however.

When Volker Mornhinweg, head of Mercedes-Benz vans spoke of the most important markets for this new truck, the U.S. was conspicuous in its absence.

“While a pickup is under consideration for the US market at some point, no timeline is available for a decision to be made,” said a U.S. spokesman in an emailed statement on the X-Class.

The global market for such mid-sized trucks is forecast to grow to 2.8 million vehicles by 2025, according to the company.

Unlike Honda, another longtime carmaker participating in the pickup truck market, Mercedes has opted for a true truck-like body-on-frame construction with separate cab and bed. All X-Class trucks will come with full-time all-wheel drive, and to start, it will use a diesel V6 engine, which is more common in the global markets where it will sell first.

The German-accented pickup will use coil springs for its rear suspension, like Ram has employed in recent years. This will provide a better ride than traditional leaf springs, but the truck will still have a payload capacity of more than 2,000 lbs. and a towing capacity of 7,000 lbs.

The X-Class will be built in partnership with the Renault-Nissan Alliance, using the Nissan plant in Barcelona, Spain and the Renault plant in Cordoba, Argentina.

Argentina is not only the home of a large pickup truck market, it is also where the first Mercedes truck, called “La Pickup,” was first sold in the 1970s. While that truck was no economic success, noted chairman Dieter Zetsche at the press conference for the X-Class, it did cultivate a dedicated fan base.

Mercedes surely prefers to reverse that outcome with the X-Class, and deciding to offer it for sale in the U.S. will help that happen.