This Rare Military-Inspired Harley Davidson Is a Mean Green Machine

There aren’t that many left. 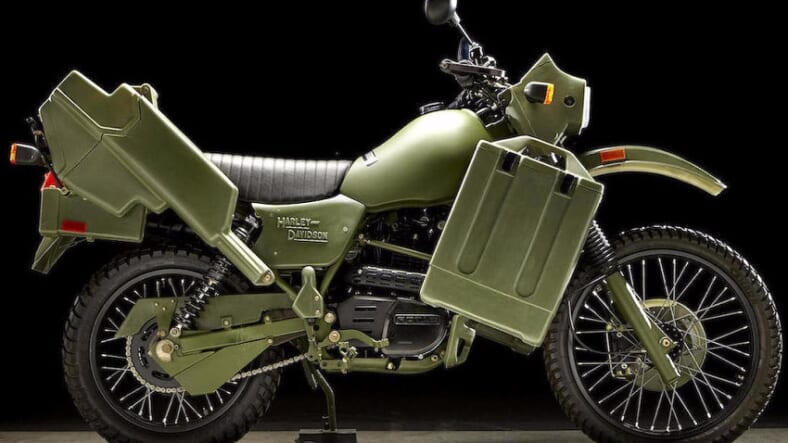 It’s both utilitarian and unique and if you don’t act soon, you could lose your chance to own one of these remarkable Harley-Davidson MT500s.

According to at least one website about military vehicles, the MT500 was manufactured in 1999 in the US and they were built for durability. They sport a 500cc 4-valve Rotax engine and can top out at 90 mph. Though made with military use in mind, they might make excellent bikes for city commutes.

On its auction page, Bonhams fleshes out some of the reasons behind why this bike is a killer collectible:

While Harley isn’t very forthcoming with details about the military bike project, it’s believed that fewer than 500 MTs left the company’s York, Pennsylvania factory from 1993-2000, making it one of the rarest Harley-Davidson models ever. The U.S. military’s requirement that diesel be the common battlefield fuel brought production to an end. This 1999 model, equipped with plastic gun case and front-mounted ammo panniers, was uncrated by a previous owner and has remained unridden in the Carter Collection’s care, showing 0 miles on its odometer.

It’s likely going to sell for $20,000 and for such a mysterious piece of history seems like kind of a steal, especially with its like-new condition in mind.

The intriguing MT500 is on the block at the Las Vegas Motorcycle Auction on January 26th, but you can get a look if you’re in town on the 25th between 9am and 6pm.