Inside the World of Pro Supercross, the Most Thrilling Sport on Two Wheels

“You gotta have balls for sure. But you need brains so you don’t crash.” 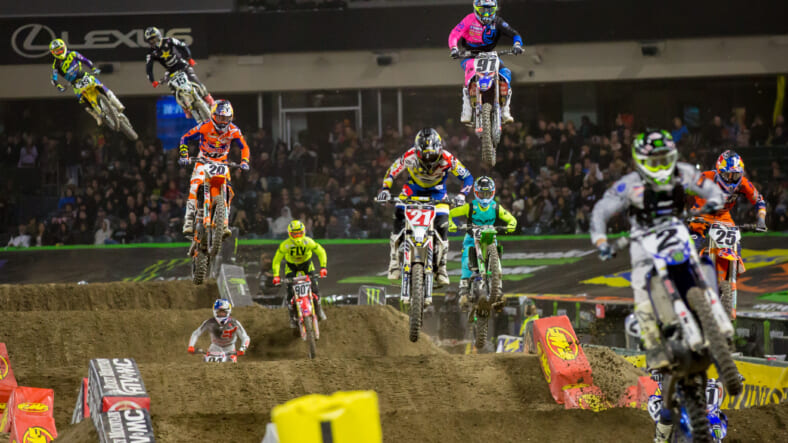 “Balls or brains?” says Justin Barcia. “Well you gotta have balls for sure. But you need brains so you don’t crash.”

It’s a little over 24 hours from the start of Anaheim 2, the third race of the 2018 season of the Monster Energy Supercross championship, and Barcia sits atop his Suzuki in the middle of Angels Stadium. He’s waiting for the afternoon practice session to begin.

Known as “Bam Bam” for his aggressive style that includes banging bikes and bodies during a race, the 25 year old laughs when I ask him about crashes. About injuries. I mean Supercross is considered by many the most thrilling sport on two wheels and eating dirt – figuratively and literally – is part of the job.

“I’ve had so many injuries I can’t keep track,” says Barcia. “I need a chart.”

Hoping not to injure myself, I quickly clear out of the way as Barcia (who sits third in the standings) and a dozen of his fellow competitors fire up their 450SX bikes and tear off along the course. Welcome to the world of Supercross.

“Southern California and Supercross have always gone together,” explains the 47 year-old.“ “The LA Coliseum was the birthplace of the sport and now Anaheim is the epicenter.”

We walked along the 4,000 yard-long course where dozens of men and tractors put the finishing touches on features like the triple-jump, the table-tops, and the whoops. It was a spectacle onto itself. Each track in the 17-round, 16-city series requires 26 million pounds of dirt.

Here in Angel Stadium, the site of two races (and five Monster Jam events), that dirt is stored under the employee’s parking lot. Every January, crews dig up the lot, put 6,800 sheets of plywood over the stadium field and built the track. And when they’re done? Feld Motorsports—the Monster Energy Supercross series owners—buy Angel Stadium a new employee parking lot and field.

Watching the Monster Energy Supercross from the stands or on TV is one thing. Walking on the actual course and seeing first –hand the steep angles of the jumps, how high the bikes will fly, and how daunting the obstacles are, made me appreciate the sport in an all-new light.

Even for former champions the danger was always very real. “I started riding when I was four,” says Emig. “And every once in a while I’d be walking a track and I’d say ‘this shit is fucking crazy!’”

Supercross is also hard. Damn hard. The pros might make it look easy, but there’s a lot more than meets the eye.

“Every track in the series is different,” explains Emig. “And each time you ride around the track it changes. It’s alive.” There are bumps and holes and ruts and lighting and weather to deal with, not to mention other riders (in the 450cc final round each race) doing whatever humanly possible to take the checkered flag. “It’s a man eat man sport,” says Barcia. “I still get nerves every race.”

So what does it take to be a top Supercross racer? For that, I turned to Ricky Carmichael, five-time Supercross champion and aptly nicknamed the GOAT; Greatest of all Time. “The guys who are very successful are very talented, calculated and intelligent,” says Carmichael.

“They’re also very athletic. Everything’s buttoned down from the cardio to the strength training. There’s preparation all week. You’re always practicing on the bike, three out of the five days you’re home during the week. Then you fly out and do your stuff on the weekends.”

Riders have to be prepared because once they’re out of the starting gate the difference between winning and losing falls squarely on their shoulders. There are no pit stops in Supercross. No radioing to coaches or engineers. Out there on the dirt it’s a solitary job. A lot can go wrong. But when it all goes well, it’s a feeling that’s hard to express.

“When you’re in that zone, like 100% on,” says Carmichael. “You’re in a completely different world. It feels so easy. But those nights don’t come very often.”

At the 450cc finals the next night, Barcia lines up with 21 other riders hoping to find themselves in that zone. But I don’t know how they can find any zone with all the the pressure, 45,000 screaming fans, a stadium sound system cranking out AC/DC and Ozzy and Motley Crue, TV cameras, laser lights, pyrotechnic blasts and 100-foot flames shooting out of the Monster Energy finish line apparatus.

My vantage point for the race? Insane. I am lucky enough to have scored a pass to the VIP Infield Suite which means I’m ten feet away from the first turn on the course. Close to enough to practically reach out and touch the riders and they whiz past. It’s not virtual reality but visceral reality – awash in gas fumes, engine screams and dirt that is kicking up and hitting me.

The main event action doesn’t disappoint either as it features a first time “Triple Crown” format with Olympic style scoring. Instead of one final race there are Main Event races, and the rider with the fewest points at the end of the three wins the overall event (the winner of each of the races gets one point, the second place finisher gets two points, and so on).

There are crashes, back and forth battles for the lead, and a substantial serious dose of both balls and brains. A little after 10pm, Kawasaki’s Eli Tomac claims A2 victory. Bam Bam Barcia doesn’t podium, but his 22 points over the trio of races keeps him in 3 place in the overall standings. Not his ideal result, but there’s no time to dwell on it.

Barcia and the rest of the Monster Energy Supercross series has to pack up and head to Glendale, Arizona, where they’ll be lucky enough to do the same thing all over again next weekend.