The legendary 1956 E-Type is set to smash last year’s $13.2 million sale of the previous record holder. 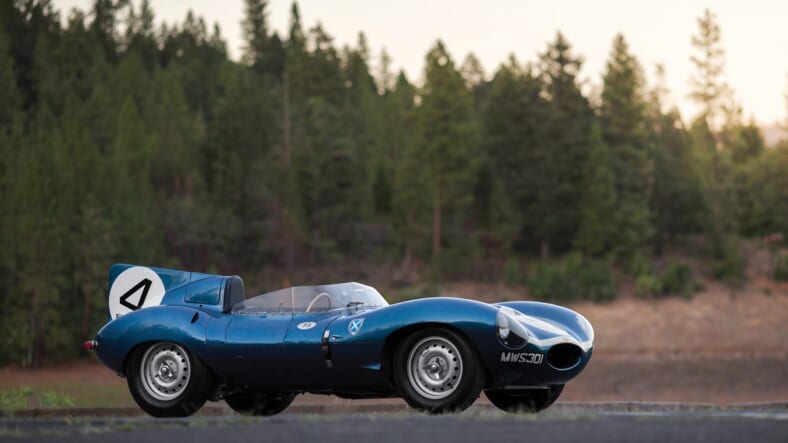 The 1956 Le Mans race-winning 1955 Jaguar D-Type is poised to score another victory as the highest-priced Jaguar ever when it crosses the RM Sotheby’s auction block during next month’s Monterey Car Week.

The car, serial number 501, was raced by the private Scottish racing team Ecurie Ecosse, which painted it in a distinctive Scottish Flag Metallic Blue finish rather than the more familiar British Racing Green commonly seen on Jaguars.

The Jaguar D-Type was notable for it innovative use of aircraft-style structural body shell in place of the prior style of bolting bodywork to an underlying frame. Jaguar was also a pioneer in the use of disc brakes and this car employs them at all four wheels.

It carries a 245 horsepower 3.4-liter inline six-cylinder engine that propelled the car to a 169-mph top speed. The Ecurie Ecosse Jaguar prevailed in the 24 Hours of Le Mans with an average speed of more than 104 mph over a distance of 2,500 miles of the rural French roads comprising the race circuit.

“XKD 501 is without question one of the world’s most significant competition cars,” remarked Shelby Myers, RM Sotheby’s car specialist in the sale’s press release.

“It has an incredible racing pedigree, having won the most grueling contest in sports car racing, the famed 24 Hours of Le Mans. What’s more is its amazing originality; pure in terms of body, chassis and engine, there is no other Le Mans winner from this period that is as original as this car.”

This will mark D-Type 501’s second visit to the Monterey Penninsula. During its first visit in 2002, the car won its class at the Pebble Beach Concours d’Elegance.

This year, the car’s fortunate buyer and the seller pocketing its predicted record-breaking sale price will likely both emerge feeling like winners.