Meet The World’s Most Extravagant Superyacht

The 390-footer comes with stingray skin walls and a secret “nookie” room. 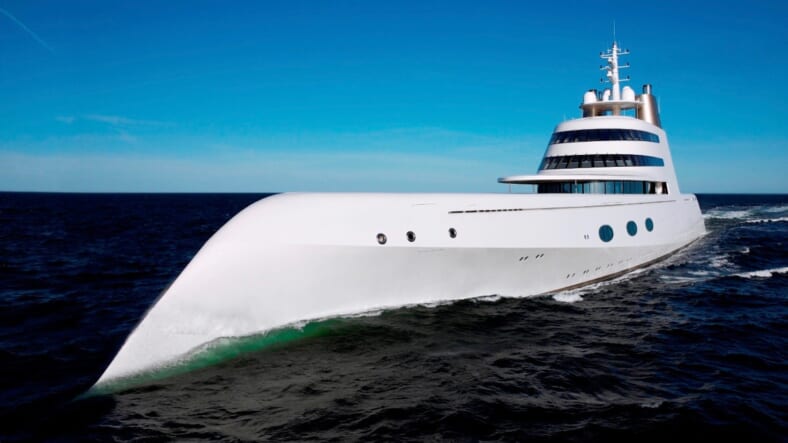 Russian billionaire Andrey Melnichenko has quietly listed his incredible superyacht designed by Philippe Starck for sale at $300 million – and it’s actually a bargain (if you’re a billionaire) because he’s selling it at cost.

The staggering superyacht it’s called simply ‘A’ and is designed to look like a futuristic stealth submarine. Built by Blohm + Voss in 2008, the 390-ft. vessel is one of the 20 largest yachts in the world.

The yacht features luxury accommodations for 14 guests in one owner’s suite and six guest suites, along with a massive crew of 37. She also boasts a helipad, a secret “nookie room” hidden behind mirrored panels, a discotheque, stingray skin walls, crocodile skin furniture.

There are also three swimming pools, one of which is glass-bottomed and can be viewed from disco below. Powered by twin 6035 hp MAN diesel engines ‘A’ is capable of reaching up to 23 knots with a range of 4250 nautical miles.

Don’t worry about Melnichenko – he’s upgrading to one of the world’s largest sailing superyachts, a massive $400 million, 469-footer also calked ‘A’ and designed by Starck. The vessel will accommodate 20 guests with a crew of 54. We’re sure if you buy his other yacht, he’ll invite you for a cruise…