Gearing up for ‘The Summer of Mars’ means building cool concepts. 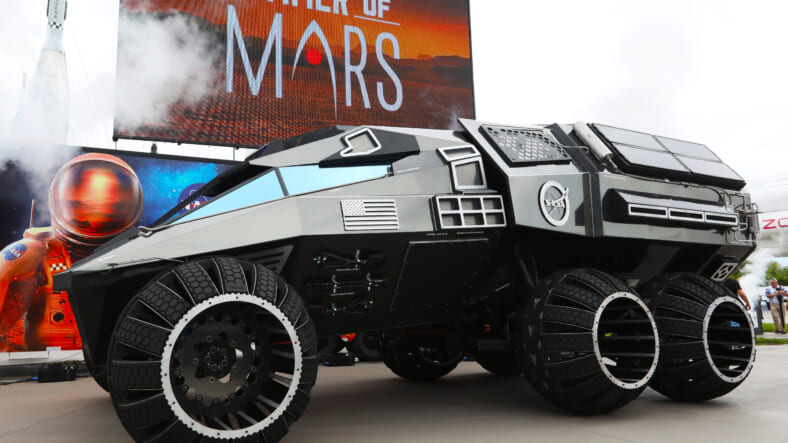 Just as NASA introduced its new astronaut class of a dozen soon-to-be spacefarers, the space agency also kicked off its “Summer of Mars” promotion for the Kennedy Space Center Visitor Complex with the display of a mock-up Mars rover.

If the 6,000-lb., 24-foot, six-wheel behemoth looks straight from this summer’s blockbuster sci-fi flick, well, it should. That’s because it was created by Hollywood prop-building brothers Shanon and Marc Parker. You saw their motorcycles in Tron.

Shanon focused on the rover’s design, while Marc led the team that constructed the black monster. Because it is intended as a promotional prop for the visitors center and not meant as a space vehicle, most of the rover’s visible characteristics are just for show.

“Some of this was just for design,” Shanon told CBS News. “You know, just for it to look cool. Other things that I thought, you know, this is kind of important to have.”

Some of those “important to have” features came from consultations with real astronauts as the Parkers built the rover. So it has four seats inside and drives much like an SUV. But there is also an open space in the rear to serve as a lab for Martian research.

The rover operates on an electric motor, powered by solar panels and a 700-volt battery. The rover separates in the middle with the front area designed for scouting and equipped with a radio and navigation provided by the Global Positioning System.

The rover will be displayed at the Kennedy Center in June, then it will hit the road, visiting east coast locations for the rest of the summer.