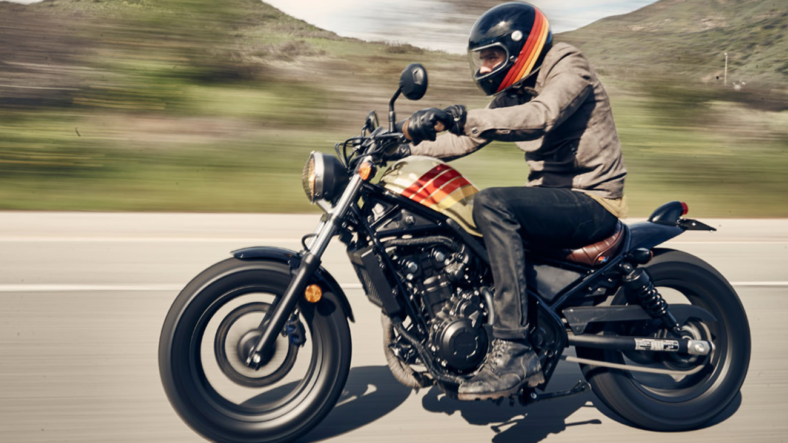 Honda’s Rebel mini-cruiser has been a staple starter bike for decades, but all those years of introducing riders to the sport have earned the little Honda more disdain than appreciation. So it’s actually big news that Honda has introduced all-new Rebels in 300 cc and 500 cc forms for 2017, and this new-age Rebel is loaded with cool-bike potential.

So much potential, in fact, that Honda commissioned Paige Mycoskie, of ’70s-inspired California lifestyle brand Aviator Nation, to create the Honda Rebel + Aviator Nation edition, which debuted this week at the SXSW festival in Mycoskie’s native Texas.

The seat features hand-stitched brown leather with the embroidered Aviator Nation signature logo strikes a retro contrast to the black, glossy fenders that flank the bike.

The gas tank’s Easy Rider Billy Bike-worthy gold shimmer is a nod to vintage metal flake drum kits and guitars, and it’s finished off with Aviator Nation’s signature four stripes painted on in the brand’s retro colors. (Check out the video above for the whole story.)

Custom brown leather grips, round rearview mirrors, a minimalist tail light and caged headlight complete Mycoskie’s design. “I was inspired by vintage motorcycles from the ’70s,” she says, which comes as a surprise to exactly no one.

“When I was given the opportunity to customize a 2017 Honda Rebel, I knew that I wanted to create a classic, clean look reminiscent of those heritage Honda bikes.”

The custom bikes go on sale at Aviator Nation stores in July, but pricing hasn’t yet been released. Meanwhile, regular Rebels arrive in Honda motorcycle dealers in late April. Either way, you’ve got a chance to drive off in style.