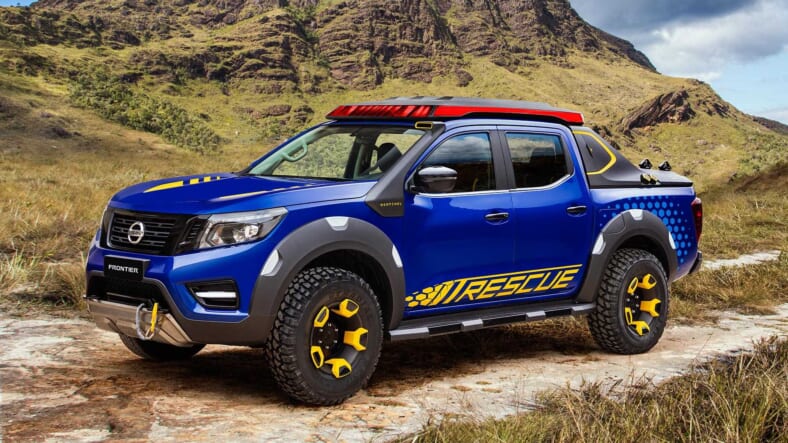 Nissan is at the Sao Paolo Auto Show and, as if to nod to the chaos currently reigning in Brazil, they have unveiled a concept version of their Frontier pickup truck, the Frontier Sentinel Rescue, specifically aimed at executing daring rescue missions across South America’s most rugged terrain.

The concept comes via a collaboration between Nissan and their Brazilian-based styling studio, and it’s loaded with innovative features to make it capable in almost any type of emergency circumstance.

Those features include a rear bed decked out with shelving for kit like batteries, helmets, ropes and axes.

Beyond the highly versatile truck bed, there’s also a flip out landing pad for search drones, a reinforced roll bar, emergency lighting systems and, wait for it, a snorkel system in case the Sentinel runs into truly deep waters.

Planning for any emergency is well and good but the killer looks of the Sentinel might make fans of Nissan’s mid-size pickup raise an eyebrow and hope that this concept becomes a commercial reality.

The thunder blue metallic paint job, highlighted with yellow trim, stands out even among the rest of Nissan’s global lineup.

Topped off with yellow piped trim in the interior, there’s good reason to hope the design cues from the Sentinel find their way outside of Brazil eventually.

It’s tough to know that so many of the coolest features of the Sentinel concept are designed to deal with horrific situations but it’s nice to see Nissan being so socially-minded. If concepts like this are the outcome of their stab at corporate responsibility, it’s easy to hope there’s more on the horizon.