This 2,438 HP Nissan GT-R Custom Supercar Is A Fiery Godzilla

Wait til you hear how fast this Japanese beast does a quarter-mile. 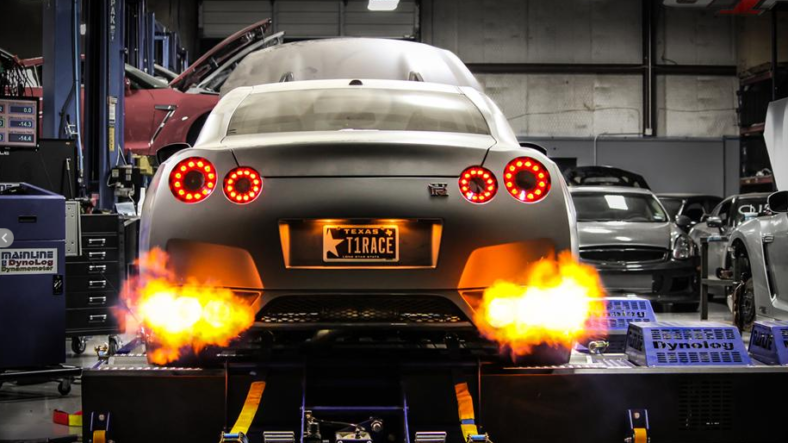 Palo uses his personal matte gray GT-R to test parts that his shop, T1 Race Development, bolts on customers’ cars. With all the company’s hot-rod parts installed, Palo’s GT-R tore off a dyno run that showed the car producing that incredible number at the rear wheels. Carmakers measure horsepower directly at the engine’s flywheel, so they get a true number for its power. Rear-wheel measurements are lower because of friction losses in the drivetrain between the engine and the dyno.

The numbers from the drag strip are equally astounding. Palo’s rocket shot through the quarter mile in 7.3 seconds, traveling 195 mph when it crossed the finish line. In a half-mile acceleration run, the car reached 235 mph.

To accelerate that hard, the car is pulling more than 2 gs at launch, and is still pushing to driver into the seat back with 1 g of force when it reaches third gear, Palo reports in the T1’s promotional video.

“The GT-R has always been the pinnacle of the Japanese supercar,” he said. “You can make a ton of power, reliably. As far as Japanese cars go, there is nothing that compares to it. As far as any car goes.”

The GT-R’s all-wheel drive system is key to the car’s ability to exploit the insanely boosted horsepower, Palo points out. Rear-drive cars can make impressive power, but they struggle to put that power to the pavement, he said.

With T1 building ever more power for GT-R customers, the company looks poised to help this Japanese supercar retain its position at the pinnacle.