Godzilla is more of a monster than ever. 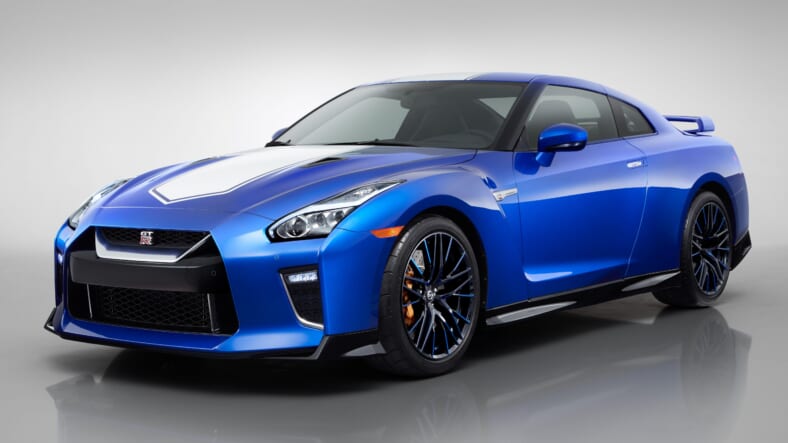 Nissan honored 50 years of the GT-R with a special “50th Anniversary Edition” of the Japanese supercar at the New York International Auto Show.

Godzilla, as the vehicle is known among gearheads, gets a double-heat treated “Bayside Blue” paint coat for the first time since the GT-R34, along with blue accents on the wheel spokes and bronze brake calipers. “Pearl White” with red stripes and “Super Silver” with white stripes round out the 50th anniversary colorways.

The commemorative model also receives a decked out interior. In addition to the eight-inch touchscreen, driver-oriented cockpit and hand-selected Nappa leather featured on all 2020 GT-Rs, the 50th Anniversary Edition has high-end Alacantra microfiber on the headliner and sunvisors, as well as one-of-a kind trim on the steering wheel and shifter.

Under the hood is the stock 2020 GT-R’s 565-horsepower, 3.8-liter V6 and a pair of brand new turbochargers that Nissan engineers designed to be 5 percent more efficient.

That may not sound like a big deal, but the automaker claims that the upgraded turbos provide sharper engine response in an out of corners. Combined with a six-speed, dual-clutch transmission tuned to make aggressive downshifts, these upgrades should make Godzilla even more of a monster on the track.

Speaking of the track, Nissan also unveiled a new iteration of the motorsports-team-designed NISMO model that produces 600 hp thanks the GT-R GT3 race car turbos. That technically makes it the most powerful production GT-R ever made.

Car and Driver has further details:

The NISMO benefits from a more serious diet that helped it shed about 67 pounds. These weight savers include more extensive carbon-fiber in the front end and lighter components elsewhere. The NISMO’s front fenders in particular now feature scalloped vents as seen on the GT-R GT3 race car that aid aerodynamics and engine cooling and add downforce. The ultimate street-legal GT-R also gets lighter 20-inch wheels with a new nine-spoke design. They’re wrapped in a set of newly designed Dunlop tires that provide a bigger contact patch for higher cornering force and better steering response.

Both GT-R models go on sale this summer. Which Godzilla  would you get?