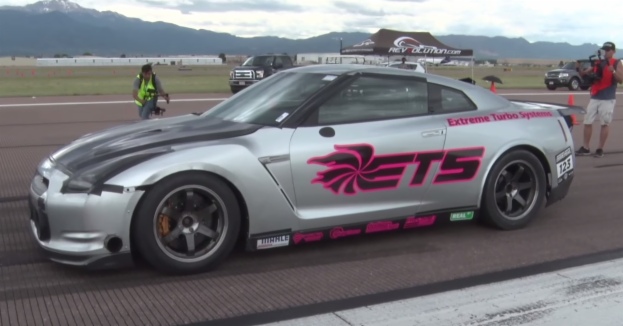 Remember how that bright yellow twin-turbocharged Lamborghini Huracan set the world speed record of 250.2 mph for top speed in a half mile last month? Well forget it, because this Nissan GT-R upped the record to 255.53 mph.

Lucas English, driver of the Extreme Turbo Systems GT-R explained that since running the car at 244 mph previously, the English Racing crew installed enlarged throttle bodies to flow more air into the engine and they worked to optimize tuning of other components because the engine wasn’t necessarily making as much power as it could have.

The result is about 3,000 horsepower, which was good for 255 mph and the new record in a run at Pikes Peak Airstrip in Colorado.

Unsurprisingly, English identifies the transmission as a weak link when channeling so much brute force, so he took care during the run to be easy on the gear changes.

For the record, the pole-setting qualifying lap for this year’s Indianapolis 500 was 232.164 mph.