No word on how quickly it can make the Kessel Run. 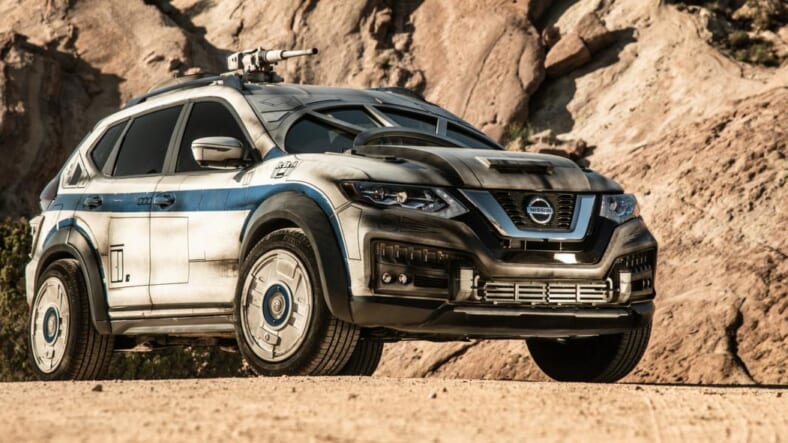 With the release of Solo: A Star Wars story mere days away, it seems like everyone in the galaxy has Han Solo fever—including the normally buttoned-up crew over at Nissan.

Much like the X-Wing Fighter version they built in anticipation of 2016’s Rogue One, the Japanese company has Millennium Falcon-ed out their top selling compact crossover SUV.

The result is truly something to behold.

As Jeremy Tucker, Nissan’s VP of marketing explains, “We started with the best-selling Nissan Rogue and worked with the talented concept designers at Lucasfilm and ILM. Then we turned to the experts at Vehicle Effects bring it to life. The result is hands-down the most complete and thrilling vehicle we’ve ever done.” We’re not going to argue with him there.

Take the “subspace-hyperdrive unit” that spans the entire width of the Rogue. Besides glowing an authentic blue, a trio of high-mounted Bose speakers and an 18-inch subwoofer provide your jams with a warp speed-worthy 1,500 watts of juice, set to pump both inside and outside the vehicle.

Here’s more on that Force-approved exterior from Nissan:

The exterior is where the workmanship of the build shines. Custom handcrafted aluminum body panels feature details mimicking the Millennium Falcon, while 3D-printed inserts bring another level of immersive depth to the project. A roof-mounted radar dish and laser cannon appear as though they were lifted right from the movie set. Up front, the multi-pane windshield clearly resembles that of the on-screen hero.

Besides the fully customized exterior, the Millennium Falcon Rogue also got a full interior makeover that channels Han and Chewie’s iconic cockpit. (Let’s hope they vacuumed up the Wookiee hair.)

There’s even a (non-working) blaster on the roof, just in case any (non-shooting) Stormtroopers start attacking you on the George Washington Bridge.

Looks like the back seat of this thing will be the ultimate place to stretch out and play a nice game of Star Wars holochess.