Truck, Yeah! Check Out The Most Exciting Pickups at Detroit Auto Show

The Nissan Titan Warrior Concept and all-new Honda Ridgeline pump up the volume. 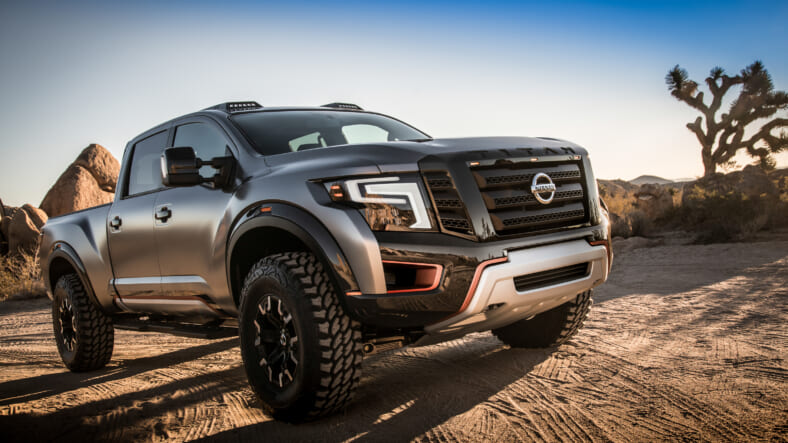 Nissan and Honda used the Detroit Auto Show to exhibit their plans for cashing in on America’s ravenous appetite for pickup trucks, showing the muscled-up Nissan Titan Warrior Concept and an all-new Ridgeline mid-size truck that hews more closely to pick-up orthodoxy than its odd and slow-selling predecessor.

Nissan aims to exploit the introduction of its tough new Titan XD, with this jacked-up, blacked-out Warrior concept that shows the vehicle’s potential as a Ford F-150 Raptor competitor for Baja 1000 wannabes.

The Warrior rolls on gnarly 37-inch off-road tires that are covered by fender flares that widen the truck’s body by six inches compared to the production Titan XD. Under the hood, the Titan XD’s brawny 5.0-liter Cummins turbodiesel V8 needed no changes from stock.

Honda has struggled with its innovative, award-winning Ridgeline pickup, at least partly because of the first-generation truck’s weird styling and also because it suffered the combination of too little power and too much thirst for fuel.

Building a mid-size truck on the front-drive, unibody underpinnings of the Honda Pilot SUV promises greater cabin space and lighter weight, but the previous model failed to exploit these advantages.

Redesigned to look more like traditional trucks, the 2017 Ridgeline is now available with all-wheel drive, to boost its utility. Honda also promises that it will provide best-in-class fuel economy, an area where the old model fell short of Honda buyers’ expectations. EPA numbers aren’t yet available.

The new Ridgeline continues to offer the in-bed trunk pioneered by the original, letting drivers secure objects in a lockable truck rather than leaving them exposed in the open bed. That bed also contains the industry’s first in-bed audio system, so tailgaters can enjoy 540 watts of audio power to liven up their outdoor activities.