The $2.5 Million Pagani Huayra BC Supercar Is One Molten-Hot Memorial

This jaw-dropping Italian beauty was built in honor of the exotic car company’s first customer. 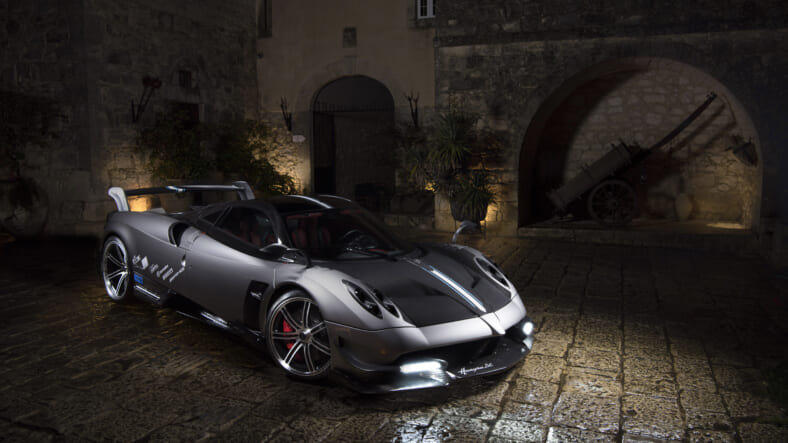 Pagani has dedicated its gorgeous Huayra BC supercar to the late Benny Caiola, the car-loving developer who was Pagani’s very first customer (the “BC” stands for his initials). The exotic Italian company’s website even features a note from founder Horacio Pagani: “Dear Benny, I dedicate the Huayra BC to you, from my heart.”

Not only is the Huayra BC one hell of a tribute, but Pagani’s passionate philosophy has applied performance-boosting tweaks typically done to a track-only editions to a car that remains street legal, yet is considerably more savage than the standard Huayra. Its more muscular 789-hp Mercedes-AMG 6.0-liter V-12 pushes the new Huayra BC to dizzying new levels of performance. As if the regular model were lacking.

The company says it sought create the world’s lightest $2.5 million supercar, while making it fast, fun and comfortable. Dropping from 2,976 lbs to 2,680 lbs., the Pagani Huayra achieved the light weight it sought, using a lighter exhaust system and an innovative new 7-speed automated manual transmission that’s 40 percent lighter than a typical dual-clutch transmission.

The custom transmission is built by race supplier Xtrac, and it uses carbon fiber synchronizers to save weight. Racing transmissions, by comparison, typically do without any synchronizers at all, so this is an example of how the car remains friendly enough for street use.

It also features an electro-hydraulic clutch system, providing light clutch pedal pressure despite the need for the clutch to transmit the engine’s considerable power.

Under the skin, the Huayra BC employs low-drag racing-style tripod axle joints in place of the conventional constant velocity joints normally used. The car’s suspension components are forged aluminum and the Brembo carbon ceramic matrix brakes are lighter than cast iron stoppers.

A Bosch electronic stability control system has three modes; comfort, sport and track, which permit ever-increasing levels of freedom for the driver to apply the Mercedes-AMG engine’s power to the road without restraint.

Despite the $2.5 million price tag and the fact that the car won’t debut until next month’s Geneva Motor Show, all 20 examples of the Huayra BC are already sold out.

It looks like you’ll have to befriend Horacio Pagani and convince him to build you your own special edition of one of his supercars. Hint: bring lots of money.