There are no mini bags of peanuts either. 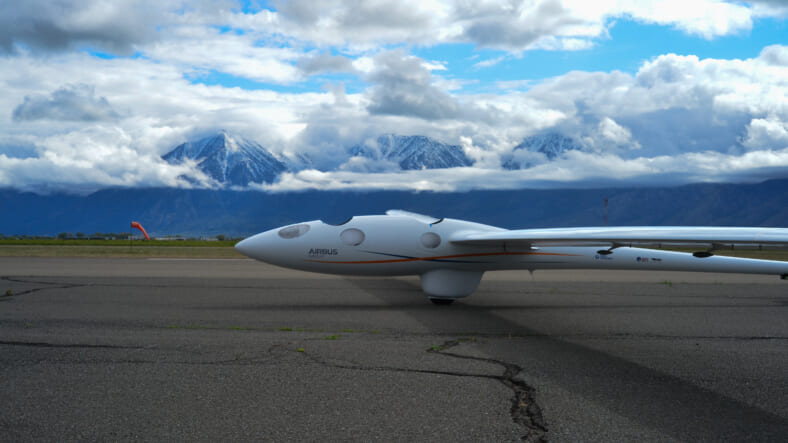 Einar Enevoldson was soaring through the sky at 50,722 feet, a world record for a sailplane or glider, but something was seriously wrong. Enevoldson and his copilot, the celebrated aviator, adventurer, and millionaire Steve Fossett, were wearing NASA-designed pressure suits that were supposed to enable them to survive flying in an unpressurized aircraft at such heights. But the suits were expanding, hindering any movement and preventing the men from reaching the aircraft’s controls. They were also doing very little to keep the aviators warm as external temperatures dropped below -65°C.

The pair landed safely that day. But although Enevoldson had just set an altitude record, he knew that to achieve his dream of piloting a glider above 90,000 feet and surviving, significant improvements needed to be made.

Enter the Perlan Project. Founded by Enevoldson, the project consists of a team of experts in aviation, engineering, and meteorology, brought together to shatter the altitude record for flight in a glider. After more than two decades of study and development, the crew is currently testing the second iteration of its glider, the Perlan 2. If successful, the group will send the glider to 90,000 feet—beyond the reaches of famous high- altitude jets like the U-2 and SR-71—powered not by turbine engines but by the stratospheric mountain waves the team has helped discover.

This story begins in 1992. Enevoldson, a former test pilot for both the U.S. Air Force and NASA, was attending a scientific gathering at the DLR (German Aerospace Center) near Munich when he noticed something peculiar in one of the images being presented. It showed extremely large atmospheric waves of air forming above mountain ranges. These vertical air flows traveled at high speed and could be detected reaching about 15 miles into the sky.

Enevoldson was struck by the idea of riding one of these waves in a sailplane or glider. But making that happen has proved to be a monumental challenge.

Enevoldson studied the meteorological phenomenon for seven years. In 1998 he teamed with Elizabeth Austin, Ph.D., now chief meteorologist of the Perlan Project. Together they not only verified the existence of what are now known as “stratospheric mountain waves” but also established that these waves were caused by the stratospheric polar night jet—essentially a jet stream on steroids—and the polar vortex. They are found only at specific locations and can reach heights of up to 130,000 feet.

“Every time I got a new lead, it turned out to confirm my expectations,” Enevoldson says. “Sometimes I thought I might hyperventilate from the excitement.”

Next, Enevoldson went looking for money. That’s when he approached Steve Fossett, who agreed to help create the first Perlan glider. Perlan Mission I focused on answering three fundamental questions: Where do these waves exist? Is it physically possible for a glider to actually climb to 50,000 feet? And what systems are needed to keep the pilots alive at conditions that closely resemble those found on the surface of Mars? With these goals in mind, in August 2006, Fossett and Enevoldson flew the 1,389-pound sailplane to a record altitude of 50,722 feet. The duo could have flown even higher if the pressure suits they’d borrowed from NASA hadn’t become unwieldy in the unpressurized cockpit.

With their initial goals achieved, Fossett agreed to fund Perlan 2, a pressurized sailplane designed to reach upwards of 90,000 feet. But shortly thereafter, tragedy struck. In September 2007, Fossett died after the private plane he was flying crashed in the Sierra Nevada Mountains. Devastated by the loss, Enevoldson had not only lost his partner but also financing for his project.

The team had discovered the ideal location—Patagonia—and conditions for riding stratospheric mountain waves. But Perlan Mission II needed funding. Enevoldson found a corporate backer in the European aerospace giant Airbus, and the team went to work on the new sailplane known as Perlan 2.

Along with bringing on Austin as the project’s chief meteorologist, Enevoldson recruited Ed Warnock, a glider pilot and business professor, to be the project’s CEO, and Jim Payne, a 22-year USAF veteran and fighter/test pilot, to be the chief pilot.

By September 2015, Perlan 2 was up and running. Featuring a pressurized cabin, an 84-foot wingspan, and weighing 1,800 pounds, the second iteration of the sailplane was tasked with much loftier goals than its predecessor. The team hopes to fly the Perlan 2 to a world-record 90,000 feet while conducting experiments on the earth’s atmosphere and ozone layer.

The insights gained from Airbus Perlan Mission II’s flights are meant to advance an understanding of high-altitude aerodynamics and test the glider’s flight and life-support systems. Austin also views the project as the ideal way to study the upper reaches of our atmosphere. Gliders can fly for extended periods at extreme altitudes, beyond the reach of traditional airplanes, and because they have no engines they don’t influence scientific measurements and experiments. “The glider does not pollute the atmosphere it is sampling and can fly slowly, making transects back and forth and up and down through various portions of the atmosphere,” she says.

In Argentina last fall, the team conducted a number of flights but wasn’t able to find the extreme meteorological conditions required to produce massive mountain waves. This unpredictability is one reason why the support of Airbus has been crucial. “Not every year provides the opportunities to get to 90,000 feet, and as we get higher we may find that our sailplane or one of its systems needs modification. So it could take more than two campaigns to reach our goal,” Enevoldson says.

While the team continues its work on Perlan 2, it has already decided that Perlan 3 will attempt to reach 100,000 feet and transonic speeds. But perhaps the Perlan Project’s most significant mission is to inspire the next generation of scientists, engineers, and flying enthusiasts to follow their passions into careers in math, science, engineering, or meteorology. The team has partnered with numerous schools and educational institutions to allow children to contribute scientific projects for inclusion on the aircraft.

“I put this among the very best projects I’ve worked on,” Enevoldson says. “Soaring is an open-ended adventure. You never stop learning.”

(This article appears in the March 2017 issue of Maxim Magazine. Subscribe now for all of the best content from Maxim.)