Nick Mason’s love for fast cars is no momentary lapse of reason. 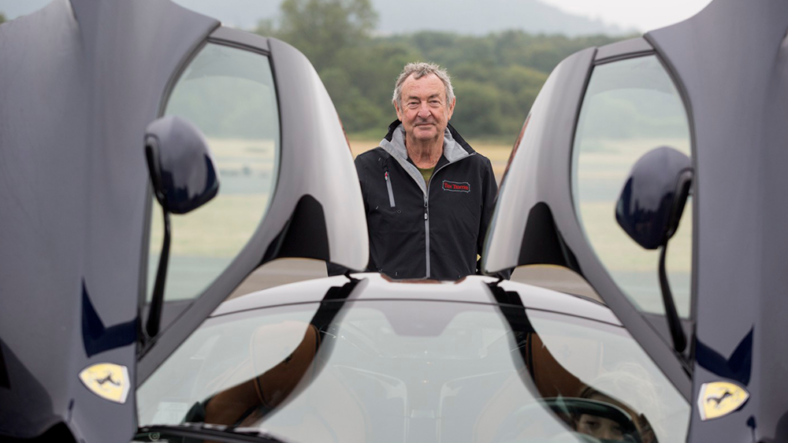 For the first time in history, old music is now outselling new releases – which means that defunct classic rock gods like Pink Floyd are raking in more royalties than ever before.

And Floyd drummer Nick Mason is certainly not short on cash. Already known for his killer collection of classic Ferraris, Mason recently splashed out $1.5 million on a brand new one – the awesome-to-behold, invitation-only La Ferrari supercar.

In the video below, Mason waxes poetic about the ultra-exclusive ride before bringing in five-time 24 Hours of Le Mans winner Emanuele Pirro to put the 900 hp Italian monster through its paces. And speaking of Le Mans, it seems the 72-year-old rocker might be thinking of driving the grueling endurance race himself.

He recently added the epic feat to his bucket list in an interview with Robb Report, noting he’s participated in the race a total of five times, starting in 1979, just a few months before Pink Floyd released The Wall. Driving in Le Mans is one thing, however, and winning it is another.

“Racing at Le Mans was a great confidence builder for me, and it added credibility to my pursuits in motor­sports,” Mason tells Robb Report.

“It didn’t matter where I finished; just participating showed commitment and proved I was serious about it… Le Mans [is] the last area in motorsports where an amateur can be competitive against the pros. You’re not expecting to beat them, of course, but you do have a chance because the race is so hard on the cars.”

Mason still has the 2-liter British-built Lola that he raced there in 1979 and 1980, though, parked, we imagine, in a place of honor next to that beautiful black La Ferrari.