The Polaris Slingshot Is Your Personal X-Wing Fighter 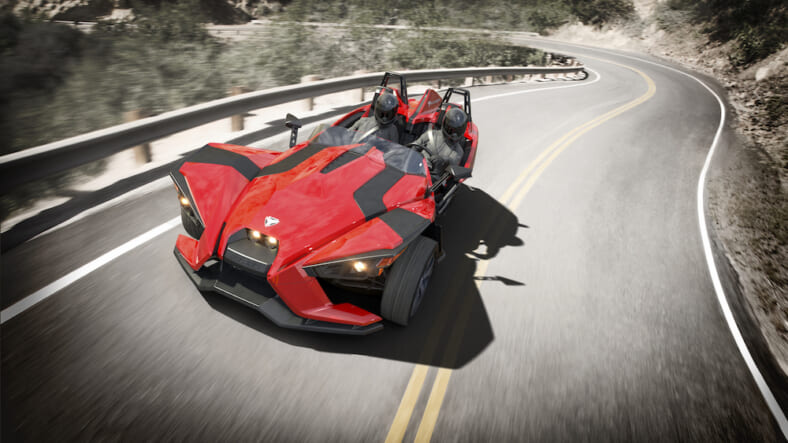 The center line slides by my left elbow as the Polaris Slingshot rockets along the rural two-lane highway, because there is no door there. Wind spills over the optional deflector the Slingshot uses in place of a windshield. There’s no roof overhead, not because, as with convertible cars, it’s folded down. Rather, as with motorcycles, there isn’t one at all.

Welcome to the all-encompassing experience of piloting the angular Slingshot, an activity that makes routine commutes like attacks on the Death Star.

The creased-and-folded fiberglass bodywork may recall an X-Wing fighter, but maybe there is a practical intent. Bruce Meyers, designer of the ubiquitous Meyers Manx dune buggy purposely made that car’s fenders flat on top to double as beverage holders when parked, and the Slingshot’s front fenders look similarly useful.

The Polaris Slingshot isn’t a car because it has only three wheels. This puts it into a legal gray area, where it avoids having to meet many laws relating to safety for cars and even lets the strange vehicle qualify as a motorcycle for High-Occupancy Lane usage in many states. As with a motorcycle, you’ll need a helmet, just to keep from eating bugs and gravel if nothing else.

Some states require a motorcycle license, while others will let you operate the Slingshot with a regular car license. Driving the Slingshot is just like driving a car, X-Wing analogies aside. In fact, it’s like driving a specific car: the discontinued Pontiac Solstice roadster.

The Slingshot uses the same front-mounted 173-horsepower 2.4-liter General  Motors four-cylinder engine and five-speed transmission as the Pontiac roadster. You grip a conventional steering wheel and toe the same familiar three pedals as in any four-wheeled sports car.

With the big four-cylinder rasping from up ahead and your elbow skimming the road, maybe the Slingshot is just a bit like the vintage IndyCar David Letterman drove at the Indianapolis Motor Speedway, minus the priceless heritage, finicky start-up procedure and attentive support crew. Just switch the key to on and hit the bright red starter button in the center of the dash.

Things get stranger around back. There’s just one fat tire back there, and it seems like when you get out, there just isn’t as much vehicle behind you as expected. Not that you can see this from the cockpit; rear visibility is nearly non-existent.

The Slingshot never feels tippy, but it does betray the absence of a wheel in subtler ways. Launch hard enough from a stop to light up the back tire and the Slingshot stays straight in line. The dramatic fishtailing of a burnout in a regular car is the result of the difference in grip between the left and right tires. With only one tire, the grip is balanced, even when that tire is spinning.

However, having just one rear wheel means there is also just one rear suspension. With a single spring holding up the back half of the car, it has to be stiff enough for two. That makes bumps particularly jarring. And potholes? Forget missing them, because if you straddle it to avoid the front wheels hitting, the center rear wheel will get it.

The tested Slingshot costs about $24,000, plus another $1,100 for shipping and dealer prep. That makes it similar in price to a 2016 Mazda MX-5 Miata. The difference is that the Miata is a comfortable, all-weather, crash-tested modern car, superior in virtually every way to the Slingshot. But commutes won’t feel like missions and no one will point at you and shoot photos of your Mazda. And if you set a drink can on the Miata’s fender, expect it to spill.