This New Supercar From Poland Is Inspired By WWII Fighter Planes

Don’t even try to crack a Polish joke about the indisputably badass Arrinera Hussarya GT. 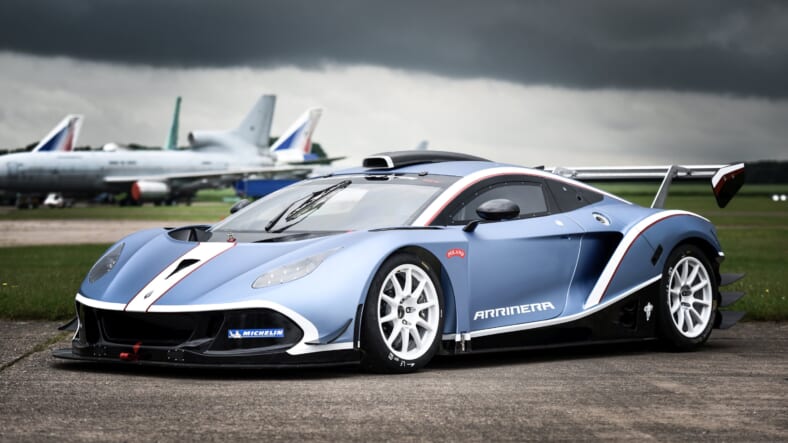 The incredible Arrinera Hussarya GT mid-engined supercar made its dynamic debut at the Goodwood Festival of Speed, making a run up the famous driveway hillclimb for the spectators. The car was first shown in a static display at the Autosport International show in Birmingham, England, in January.

The $187,000 Hussarya marks Poland‘s entry into the supercar race against traditional nationalities such as Italy and Britain. The name “Hussarya” comes from an historic Polish calvary unit, but the car’s true inspiration was the Polish pilots who participated with the Royal Air Force in 1940’s Battle of Britain.

They piloted Hawker Hurricane fighters as members of the RAF’s 302nd and 303rd fighter squadrons, and “302” badging is a tribute to those planes, while the sky blue paint refers to the high-altitude Supermarine Spitfire photo reconnaissance planes that also flew in the war.

By coincidence, the 302nd squadron flew from an air base now known as Goodwood Aerodrome, at the same estate as the hill climb event.

The carbon fiber-bodied beast was designed by a team at Warsaw Technical University, using a steel tube frame chassis built to FIA racing specifications. While most modern sports racers like the Hussarya are entirely carbon fiber, use of special lightweight steel and careful design kept the car’s weight down to the 2,755-lb. minimum permitted by the class rules.

The roof-mounted cold air scoop feeds a 6.2-liter General Motors LS3 small block V8 engine like the one in the 2016 Chevrolet SS, but in a customer-specified state of tune between 420 and 650 horsepower. The engine mates to a Hewland LLS six-speed sequential racing transmission that routes power to the Hussarya’s rear wheels.

The company says that it will continue testing the Hussarya through the year, with delivery of race-only versions in late 2017, followed by road-legal cars.