The All-Electric Porsche Taycan Is Here, And We’ve Got the Photos To Prove It 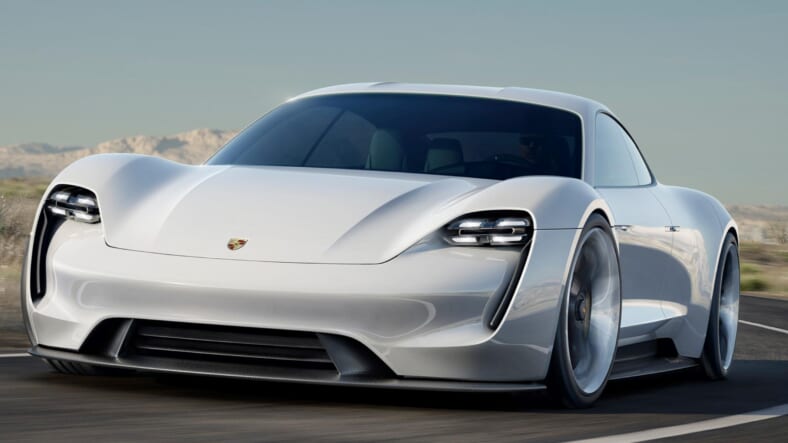 Starting its life as the Mission E project, Porsche’s finally-announced Taycan is set to roll into production for 2019. Translating as “lively young horse”–a reference to the center of Porsche’s historic crest–the Taycan represents an extraordinary investment in Porsche’s continued leadership in performance and innovation on the roads of the future.

The Taycan itself is a marvel in terms of style and performance. Sporting looks somewhat similar to the Panamera, it’s no real surprise that Porsche has opted for their first fully-electric vehicle to choose the versatility of four-doors and a proper trunkspace seeing how well the touring class has done for them recently.

The Taycan does have an overall meaner look than the family-friendly Panamera, though. There are plenty of scoops that surround the front and side of the car for better aerodynamics and a more menacing front end that’s hard not to swoon over. Huge curves on the fenders and a big round ass on the Taycan round out the striking style of the Mission E’s awesome offspring.

Stunning looks aside, the true test of the Taycan is its ability to compete with the likes of Tesla in terms of performance. The Taycan actually has a lower center of gravity than a 911 and the tech in the motors has been so fine-tuned that Porsche feels comfortable saying that the Taycan, through and through, has the DNA of the Porsche brand in terms of the way it drives.

That’s a lofty claim to make, especially without announcing 0-60 figures but, if driving a Taycan can truly deliver the exhilaration people have come to expect of a Porsche and boast a 500 km range (310 miles) then this may be the Tesla-alternative the world has been waiting for.

Since the all-electric route puts them in direct competition with Tesla, Porsche seems hyper-aware that the Taycan’s interior needs to surpass that of the Tesla S. And they have.

There is some serious wow-factor for the wall-to-wall clusters of screens for all the instrumentation and controls; behind the wheel, on the dash and on the center console. All those screens are then wrapped in a tight, leather gut that hug you like a race car would but with a thoroughly futuristic look.

Last but not least, the Taycan’s trim contribute to the overall future stylings of the car. Unique LED headlights, hideaway door handles, a secret, sliding charging port and a carbon fiber front lip are the details expected from a Porsche that’s setting the precedent for the future of the brand.

Now that the company has invested $6 billion and is hiring another 1200 employees to carry the original Mission E philosophy to the rest of their lineup, expect to see the Taycan’s cues in many more Porsches moving forward.