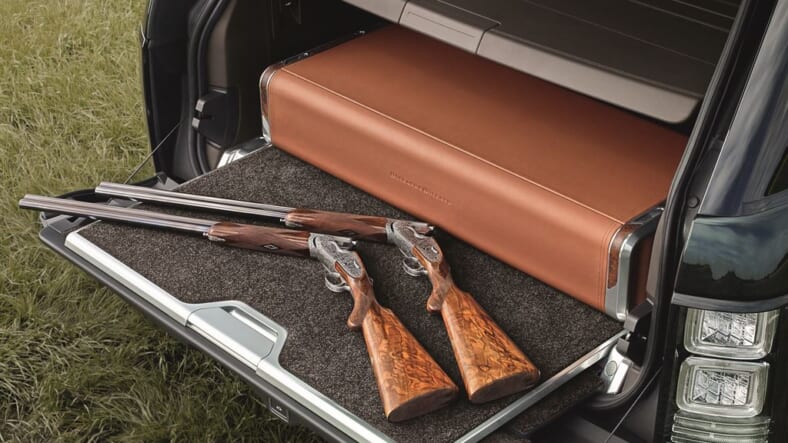 The lads at Land Rover must be getting a bit miffed at all the press Bentley’s Bentayga has garnered as the “world’s fastest, most exclusive and expensive SUV.”

On Tuesday, the British brand announced a new limited-production Holland & Holland Range Rover edition, the latest collaboration in a long-running relationship with the famous London gunmaker and hunting outfitter, which costs $244,500—that’s a cool $15,500 more than the production model Bentayga.

Only 30 of the beautifully crafted SUVs will be offered for sale in the U.S., built by the Jaguar Land Rover Special Vehicle Operations (SVO) division. Based on the flagship 550 hp Range Rover SVAutobiography, which is already pretty posh with a base price of $199,495 (just call it $200K, for Chrissakes), the ultimate hunter’s luxury truck comes finished in Holland & Holland distinctive, and very British, dark green paint.

The Rover’s rear cargo space has been reconfigured to house a deployable, locking, leather trimmed gun case which accommodates two handcrafted Holland & Holland shotguns, considered among the very best in the world. The signature acanthus scroll engraving found on Holland & Holland guns is repeated on metalwork details in the vehicle’s interior, a true bespoke touch.

In addition a unique dashboard trim panel is based on the diamond pattern used on the fore end of Holland & Holland rifles and shotguns. Polished French walnut veneers also match the wood used on Holland & Holland shotgun stocks, while the extended leather upholstery and trim comes in an exclusive espresso and tan combo unique to the model. Get your order in fast is our advice, and expect delivery, upper-class sporting adventures – and beaucoup bragging rights – this spring.