The futuristic aircraft can fly from New York to London in just one hour. 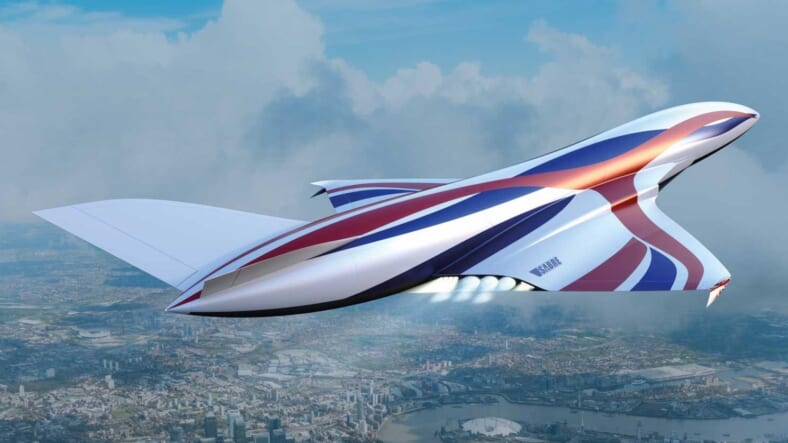 A “Space Plane” capable of traveling at 25 times the speed just reached a major breakthrough.

Reaction Engines is working with the European Space Agency and the UK Space Agency to develop a hypersonic aircraft that could zip from New York to London in just one hour.

The British aerospace manufacturer has tested the an essential piece of equipment called a precooler, which prevents the plane’s engine from overheating.

The pre-cooler is critical in the plane’s development because it is required to stop the engine from melting by lowering the temperature of compressed air in the engine from more than 1,000°C to room temperature in one-twentieth of a second.
Thousands of tubes inside the pre-cooler, which are thinner than human hair, contain liquid helium that can cool the air as it rushes past them.

Reaction Engines announced that the precooler successfully performed in simulations  at Mach 3.3, over three times the speed of sound and 50 percent faster than the famous Concorde supersonic airliner, according to CNN.

But the precooler is just a piece of a larger plan to develop a Synergetic Air-Breathing Rocket Engine (SABRE).

Speaking at UK Space Conference 2019, which took place from September 24 to 26, Reaction Engines executive Shaun Driscoll said, “The main thing with Sabre is it’s like a hybrid of a rocket engine and an aero engine, so it allows a rocket to breathe air…rockets really haven’t progressed in 70 years, whereas aero engines have become very efficient.”

“So, if you can combine an aero engine and a rocket you can have a very lightweight efficient propulsion system and basically create a space plane. The physics checks out but the challenge is building a test regime,” he said per Stuff.

The SABRE is being designed to draw oxygen into the engine for combustion until it hits just over 4,000 mph in the earth’s atmosphere. Then it will “turn into a rocket” and fly into space at up to 25 times the speed of sound—over 19,180 mph— by burning a combination of liquid oxygen and liquid hydrogen.

Reaction Engines has already received more than $130 million in funding over the last four years and secured investments from big names in the industry, including BAE Systems, Rolls-Royce and Boeing HorizonX.

In addition to flying passengers across the globe in record time, the hypersonic plane could also be used to transport cargo or people into space for a fraction of the current cost.

As for the more immediate future, Boom Supersonic recently acquired the funding to prototype a 1,688 mph jet that could fly passengers from New York to London in 3.5 hours.