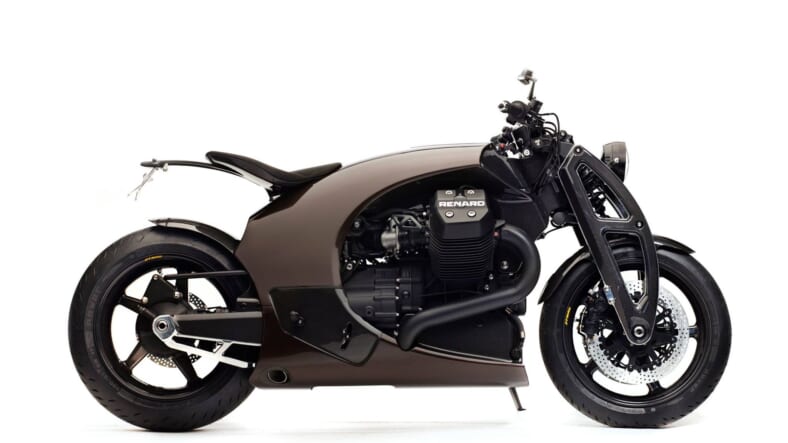 Renard Motorcycles carries forward the fine tradition of Estonian V-twin motorcycle building with an amazing carbon-fiber-framed masterpiece called the Grand Tourer. Wait, Estonian motorcycle tradition? OK, maybe there isn’t such a thing yet, but maybe there will be if the geniuses at Renard get their due for this amazing ride.

While a lot of other V-twin motorcycle builders rely on Harley-Davidson engines, Renard prefers to turn the V sideways in the frame by using a 123-horsepower, 1,326cc air-cooled Moto Guzzi engine instead.

That engine’s good for 155 mph, a pace at which the rider is sure to appreciate the stability provided by the GT’s extremely rigid frame, girder fork with double-adjustable Ohlins front shock absorber and monoshock rear suspension with a triple-adjustable Ohlins.

The GT’s wheels are carbon fiber and braking is provided by Brembo six-piston monobloc front calipers and four-piston monobloc rears, again, for maximum rigidity. All the lightweight materials keep the curb weight down to a feathery 374 pounds.

Motogadget provides its popular Chronoclassic instrument package to convey information to the rider.

So far Renard hasn’t announced pricing or U.S. distribution, so we are left to wait for a chance to ride this amazing mount. But if things work out, perhaps Estonia’s motorcycle industry can revive its stillborn tradition that was begun in 1938 before it was so rudely interrupted by World War II and a half-century of Soviet occupation.