This Super Sleek Yacht Concept Is the Catamaran of Your Dreams

Sailboats don’t get any more badass than this. 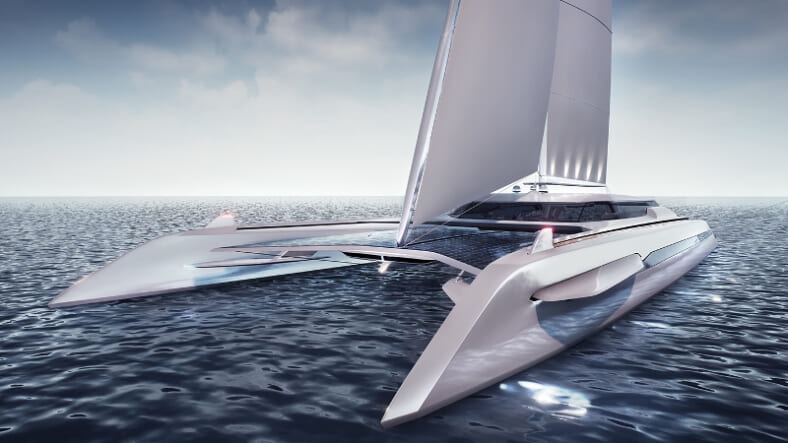 Although sailing vessels have long taken advantage of that ecologically friendly power source we call the wind, none have done it quite like this.First of all, designer René Gabrielli‘s stunningly sleek catamaran concept features a pair of telescoping sails that rise up from the deck and expand (and retract to hide away again) on command. A very modern take on the millennia-old rigging theme.

Second, it also takes advantage of solar energy, with plentiful panels plastered along the bow storing enough electricity in a substantial battery to power the ship if ever a reliable breeze were elusive. Beyond that, Gabrielli tells us that a diesel engine might propel this roughly 250-footer at speeds around 15 to 20 knots.But neither that nor the spacious pool amid-ship are the coolest feature of this futuristic luxury liner.

Apparently, the entire main cabin would move. Picture something like that Chinese elevated bus; but instead of straddling cars in traffic, the entire cabin would move over you and your guests on the main deck. It sounds like an ingenious way to transform itself on-the-fly.

Though it’s difficult to estimate a precise cost for this eco-friendly, shape-shifting yacht, Gabrielli hazards a guess somewhere in the two to three million dollar range. Of course, that depends on how you furnish it, etc. But what’s a million in either direction?