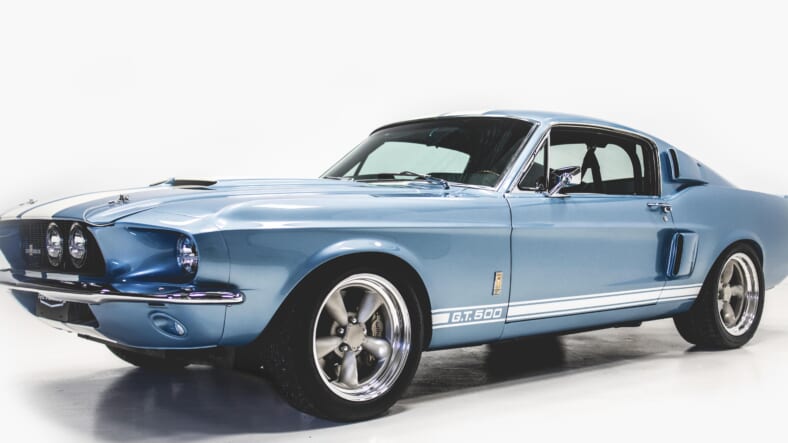 Classic car hero Tom Scarpello ended the frequent barroom discussion topic of how somebody should make a brand-new version of a classic car when his company, Revology Cars introduced a 1966 Mustang with contemporary chassis and drivetrain technology beneath the period sheetmetal in 2014.

Having built fastback and convertible editions of the original Mustangs, followed by a Shelby GT350-specification high-performance version, Revology has moved on to the second-generation Mustang of 1967-’68, with the Revology 1967 Shelby GT500.

This neo-hot rod is powered by a supercharged 5.0-liter Ford “Coyote” double overhead cam V8 built by Roush Performance to provide 600 horsepower and 475 lb.-ft. torque, so Revology’s Shelby is faster than the originals were back in the good old days.

It stops and turns better too, thanks to the Wilwood six-piston front/four-piston rear disc brakes, rack-and-pinion steering and coil spring rear suspension instead of the old leaf springs.

Those are all fabulous under-the-skin upgrades that a modern car driver might not necessarily notice if they aren’t familiar with the shortcomings of the original model, but the new Shelby also includes modern climate control and infotainment technology that every driver will notice and appreciate.

There are other small touches too, like all-LED lighting throughout, so there will never be a burned out bulb. The cabin is appointed with brushed stainless steel, walnut wood and leather where the original car employed plastic and vinyl. And the rear seat folds down for convenient pass-through to the trunk for carrying long items.