The Rhino GX Looks Like It Can Roll Through A Warzone

This military-inspired truck is ready for battle. 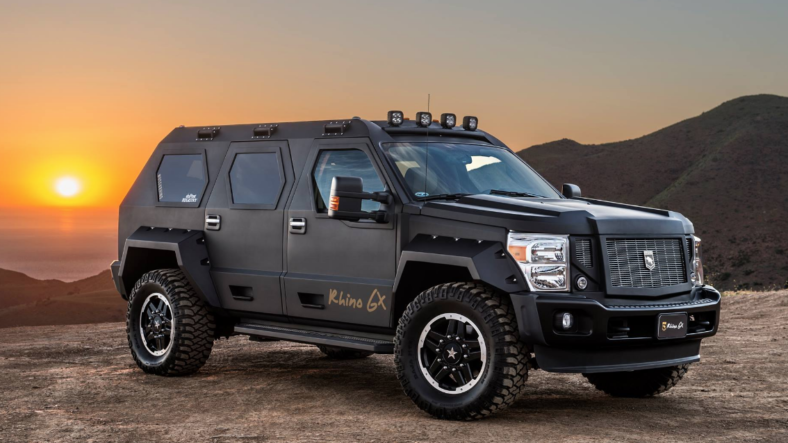 The Hummer H1 may be gone, but with cheap gas, military chic SUVs are making a comeback with vehicles like the U.S. Specialty Vehicles Rhino GX. This brawny beast might look like it can repel small arms fire, but it isn’t actually armored because its weight would make the already hefty Rhino too heavy for regular use.

USSV promises the $194,000 Rhino delivers luxury and comfort to go with its battlefield-ready appearance. The truck is built on the chassis of a Ford SuperDuty truck and the purpose-built bodywork is stamped from steel designed to give the Rhino the aura of armor without the cost, mass, or fuel efficiency penalty.

With a standard 362-horsepower 6.2-liter V10 engine, the Rhino is still thirsty even without the armor. It can be configured as either a five-or seven-seater and has amenities like dual sunroofs to shine the light on its leather upholstery.

With job site-worthy SuperDuty solid axles front and rear, the Rhino should be able to handle the worst terrain, but a smooth ride could be a challenge. So USSV provides a standard air suspension system and offers an optional adjustable hydraulic system for even greater flexibility.

One thing’s for sure: the Rhino’s warlike looks just might be able to lure in drivers who still have a hankering for the Hummer H1.