Here’s what it’s like to burn rubber in an Indy car. 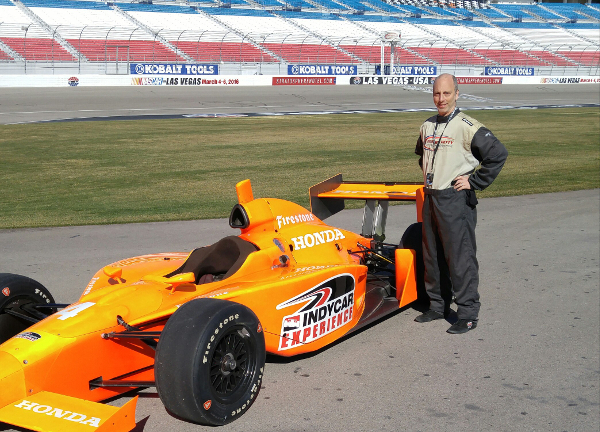 Since I was going to be in town anyway and had a little downtime before #CES2016 officially started, the folks at the Richard Petty Driving Experience invited me to take a high-speed ride in an Indy Car at the sprawling Las Vegas Motor Speedway complex. Despite having visited Las Vegas numerous times for various personal and professional endeavors, I’d never done anything like this. So I was very excited—and able to parlay that invite into much more.The first time I was scheduled for the ride, I’d gone all the way there (40 minutes from where I was staying, southeast of the airport) only to find out the track wasn’t dry enough for driving after a morning rain. They managed to call all the “regular” folks ahead of time, but somehow didn’t have a number for this journalist. So perhaps it was out of pity that when they rescheduled me for a few days later, they also upgraded my experience to not just riding in an Indy car but getting to drive one…and ride and drive a stock car as well.The Stock Car RideAs I signed waivers and suited up, my driver took a few warm-up laps. Then I headed down to the track. I climbed in (“Dukes of Hazzard” style), got strapped in and 600 horses pulled us onto the track for a few heart-pounding laps. It was loud, fun and fast. It gave me new appreciation for how those guys sustain that intensity for hundreds of laps at a time. And it made me wonder how the Indy car would differ.The Indy Car RideNot that riding in a NASCAR was nothing, but I was more excited about this one, both because it’s unique to this location and the most unlike anything I’d experienced. With not much room to spare for my six-foot medium build, I squeezed into the special tandem two-seat Indy car. A few safety checks and we were off.At first I was a little disappointed. We did a few laps that—despite the open cockpit and being lower to the ground—didn’t feel any faster than the stock car ride. As we pulled into the pit, a crew member leaned over and said, “Okay, now that you’ve done your warm-ups, are you ready for the real thing?” Yes, yes I was.We were flying. The rush of adrenaline made me want to buckle in to the driver’s seat even more.(For safety reasons, they don’t do video during student Indy rides, but this’ll give you a rough idea of what it’s like.)

Driving an IndyAfter a brief but thorough class that seemed to last no longer than the pre-amble for racing go-karts at a local indoor track, we walked down to the Indy cars. Our goal in driving independently was to stay six car lengths back and right in the tire tracks of the instructor (also driving an Indy car).Before I got to go, I watched a fellow student drive slow—what looked not much faster than I’d gone on the highway leading up to the track—and vowed I wouldn’t be that guy. Cause the more he slowed, the more the instructor did. When my turn came, I squeezed into the orange #4 car and they secured me. It was already in fifth gear, so all I needed to get going was a steering wheel (they were kind enough to provide), a quick ignition and a push.From there on out, my foot was pretty much on the floor the whole time. Not to say that I’m a wild man, these cars are just engineered to handle the track and don’t need to slow into turns like the stock cars do.Based on maintaining a good line and speed, they let me go 124 MPH, though it felt faster. The weirdest adjustment was having to turn right out of the curves, cause the steering is set to cheat to the left. On the straightaways, this meant steering towards the wall, which took a couple of laps to get used to.

Driving a Stock CarFor this very different experience, my instructor was in the passenger seat. He communicated through both voice (on the helmet radio) and hand signals (which he’d explained prior). For the most part, I had three missions: 1) Drive between the “gates,” two white dashes painted on the track, 2) Slow down when I saw a single cone on the left and 3) Speed up when I saw double cones on the right. In other words, even though the car was under my control, there were plenty of cues as to what I was supposed to do.During the initial five minutes—sparingly clipped from the beginning of the video below—we were sitting there chatting about what I’d seen at CES, driving and last-minute pointers. Then we started her up (where the video below picks up), shifted into gear and took off.Yet the best was just under two minutes in: the feeling of passing a fellow student going into a straightaway. Although I didn’t get the sense I was going very fast, my lap sheet reported my top speed at 141 MPH. Having an instructor giving constant feedback made me feel less independent. But it was definitely fun getting to drive that speedy, grumbling monster. Also, better supervised than dead.

If you choose to purchase the USB (which also includes your photos), know that the video shows both directions. In other words, you’ll get one showing your face and one looking out the windshield. (I didn’t figure anyone’d want to see my mug for eight minutes.)In the end, it’s tricky to say which experience is right for you. But given another chance to drive an Indy car, I’d go back in a heartbeat. Either way, as Richard Petty says in one of the introductory class videos, “It’s just something you have to experience for yourself.”