We get locked and loaded with sporting clays and off-road antics in the wilds of North Carolina. 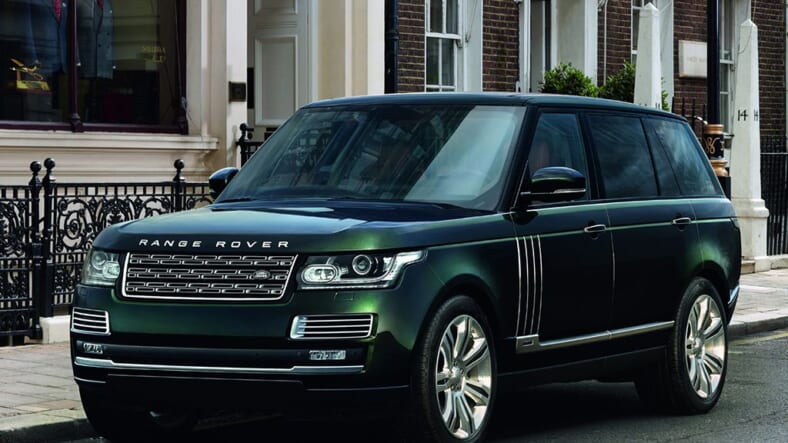 After cruising the California desert in the $229,000 Bentley Bentayga recently, we thought we’d reached the ne plus ultra of luxury SUV experiences. However, the bespoke Range Rover created by the British brand in collaboration with venerable London gunmaker Holland & Holland just blew our socks off at Biltmore, the sprawling 8,000 acre estate built by George Vanderbilt in the mountains of Asheville, North Carolina.

At $244,500 the Holland & Holland Range Rover is technically more expensive than the base model Bentayga, and with only 30 examples produced for the U.S. market, it’s also far more exclusive. At 550 hp you can add damned fast, based as it us upon the Range Rover SVAutobiography, with the same supercharged V8 as the Range Rover Sport SVR, the fastest Range Rover ever.

The incredible SUV, designed for sporting gentlemen for whom the $199,000 Range Rover SVAutobiography is perhaps a bit too plebeian, was created by Land Rover’s Special Vehicle Operations (SVO) division, the same lads who created the custom Land Rover Defenders that James Bond destroyed in Spectre. SVO is rapidly making a name for itself alongside other super-luxe in-house customizers like Bentley’s Mulliner division and McLaren’s Special Ops.

Land Rover maintains an off-road school at Biltmore, the largest private house in the country, now a resort and winery which happens to have a sporting clays club as well. Obviously the perfect place to rub elbow patches with the Holland & Holland Range Rover, which we imagine would have been right at home in the Vanderbilt stable if they still lived in the mansion (a branch of the family still owns it, and lots besides).

Inside the ultra-luxe SUV you’ll also find polished French walnut matching the wood on Holland & Holland shotgun stocks, and loads of beautiful, butter soft leather covering every surface in the cabin in the perfect shade of espresso, unique to the model. The photos don’t really do it justice, perhaps because the refinements in the ultimate gentlemanly Range Rover are so very British, that is to say insanely elegant but rather understated.

The same could be said of Holland & Holland’s shotguns, which are beautifully made and perfectly balanced, with some of the most exquisitely engraved models with the best walnut stocks going for $150,000 or more. Given the nature of the occasion it was only fitting that we got to try the luxe firearms for ourselves on the Biltmore shooting course.

Our old comrade-in-arms, dashing menswear designer Duncan Quinn, was on the program as well, one-upping us from the word go in a bespoke three-piece tweed suit that proved the perfect accompaniment to the custom dark green SUV and its plush leather interior. However we soon proved our mettle thanks to the incredible craftsmanship and precision of the Holland & Holland 28-gauge sporting gun.

Not for nothing does Holland & Holland, established in London in 1835, hold Royal Warrants from the Duke of Edinburgh and the Prince of Wales. Tweed or no tweed we started off picking off clay pigeons like flies, and though we’d like to take full credit for the feat, we must concede that the purity of design and incredible accuracy of the over-and-under shotgun had something to do with it.

Following which it was time to test out the Range Rover’s offroad capabilities – not that we had any doubts on that score, having owned one for several years. However we’d yet to experience the surprising agility of the aluminum bodied model which is significantly lighter and amazingly nimble considering the sheer size of the vehicle.

The Land Rover Experience Driving School at Biltmore has one of the finest offroading courses in North America, taking full advantage of the possibilities of the 8,000 acre estate. We may have winced slightly at the first splash of mud on the pristine dark green paint, but after that it was no holds barred as we roared down ravines and up steep gradients, over boulder-strewn inclines and through foreboding water traps.

Nothing that even remotely caused the car to spill its sherry, figuratively speaking, though we may have wondered at one or two of the tricky bits. Unlike some super-luxury SUVs we could name, we expect that a fair number of Range Rover owners, even Holland & Holland ones, will in fact take their vehicles into uncharted territory if only to get to unsuspecting pheasants. So it’s comforting to know it can handle all the rough stuff with aplomb.

The traditional English gentleman may soon find himself an endangered species, what with the banning of foxhunting, reform in the House of Lords and the end of Downtown Abbey. But the Holland & Holland Range Rover, if nothing else, stands as a bastion of bespoke British style and a tribute to all things the gentleman of leisure, the modern day Vanderbilt, should spend his time doing – there’s even a fold out tray in back that’s perfect for holding a bottle of single malt. So here’s to living – and driving – like you own the place.