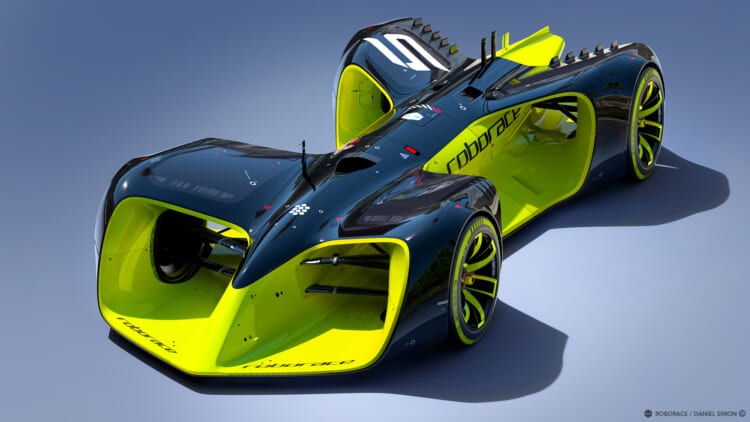 As we’ve seen with aerial drones such as the Predator, vehicles can change shape dramatically when the human operator is removed. That’s one reason the futuristic new Roborace autonomous electric race car looks so unusual. And the elimination of equipment associated with an internal combustion engine also contributes to the racer’s strikingly sci-fi appearance.

Roborace, which aims to be the world’s first driverless racing series when it debuts either later this year or in 2017,  is demonstrating its cars at Formula E races worldwide this season, starting with the race in Long Beach, Calif. this weekend. By removing the driver, it’s also possible to get rid of all the crash protection structure associated with protecting that driver, so changes to the car’s design extend beyond removing the cockpit, seat and steering wheel.

Chief designer Daniel Simon’s background is in movies, such as Tron:Legacy and Oblivion, so he’s used to dreaming up eye-catching concepts for entertainment’s sake.

“My goal was to create a vehicle that takes full advantage of the unusual opportunities of having no driver without ever compromising on beauty,” he said.

“Racing engineers and aerodynamicists have worked with me from the beginning to strike that balance,” Simon continued. “The Roborace is as much about competition as it is entertainment.”

We can’t wait to see these robot race cars in a fight to the finish.