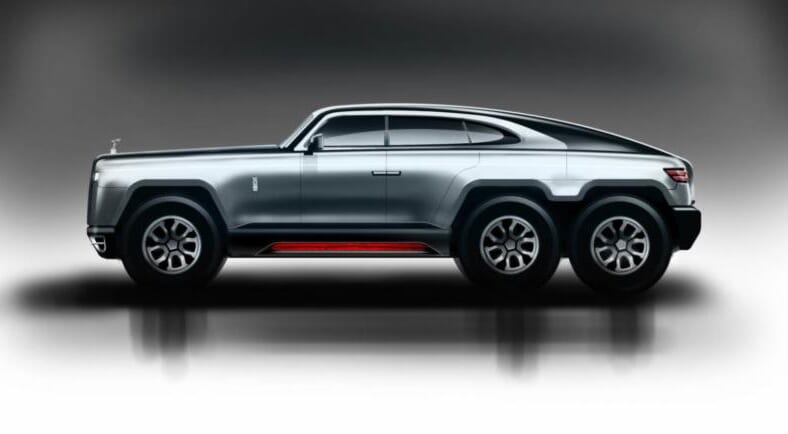 Here at Maxim HQ, we love us a massive 6×6 beast. Whether it’s a 600-horsepower Hennessey Velociraptor, a custom Land Rover Defender, or a monstrous Mercedes, we truly believe that six wheels are better than four.

Then we saw this eye-popping Rolls-Royce concept by an Indian designer named Vivek… and, well, our jaws are still on the floor.

The folks at BMW Blog broke down what, exactly, this thing is:

The rendering we’re looking at here is, without a doubt, madness. It shows a Rolls-Royce Wraith silhouette turned into a 6×6 monster that can seemingly take on anything. Huge wheels and an elongated roofline point in the right direction but the truth of the matter is, this will never see the light of day as a production model.

On the other hand, since Rolls-Royce has recently said that it’s interested in making more unique, coachbuilt cars like the Sweptail, this rendering might give a billionaire or two an idea. This would be a great way to introduce the project Cullinan to the market as well, building a one-off monstrous SUV to show that they could’ve done a hardcore offroader if they wanted to but chose not to do so. In the end, it’s all speculation but I wouldn’t mind seeing such utter madness on the street.

OK, so maybe it won’t ever go into production. But just in case any insanely wealthy oligarchs are reading this, we’d love to see one IRL.