The Dawn, Wraith and Ghost are back in black. 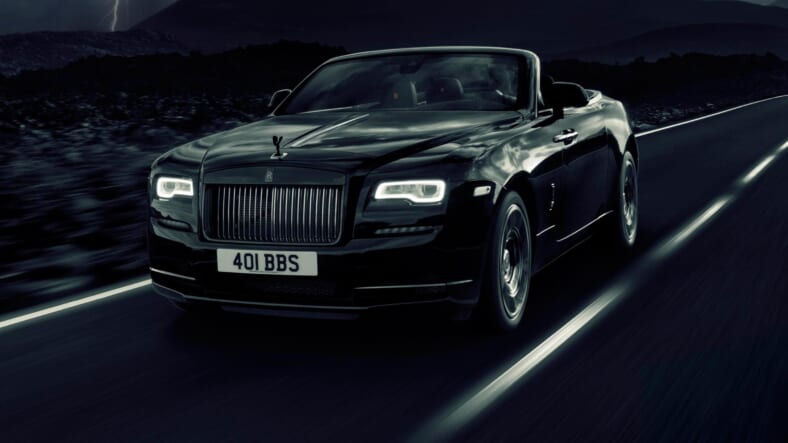 Black Badge is a modern styling theme that Rolls-Royce offers on its sportiest models, the Dawn, Wraith and Ghost, in which the traditional chrome brightwork is swapped out for more menacing black chrome.

Rolls doesn’t do anything as gauche as branding this trio as a “collection,” but the purveyor of classic British luxury cars did provide us with an opportunity to try all three versions of Black Badge during a tour downtown Nashville and the surrounding countryside.

And by the way, the blacked-out chrome is not just for the small trim bits, but also for the cars’ towering Parthenon grille and Spirit of Ecstasy power-retractable hood ornament.

The wheel hubs and spokes are 44 layers of folded black carbon fiber, fastened with titanium bolts to aerospace-grade forged aluminum rims. The carbon fiber treatment extends inside the car too, with a carbon fiber dashboard panel in place of the expected fine wood.

Rolls makes this piece distinctive by weaving aluminum thread into the carbon fiber to add some sparkle. Even the chrome air vents are blackened with tarnish-proof vapor deposition technology.

The roof-lining headliner also glitters thanks to installation of the Rolls-Royce black starlight headliner, which employs fiber optics to create a nighttime starscape inside the cabin of hard top Black Badge models.

Convertibles like the Dawn have the option of providing a view of real stars by folding the thickly insulated canvas roof at the touch of a button.

Black Badge was created in acknowledgement of the fact that Rolls-Royce posh image could actually be a mild deterrent to some younger, active customers who see themselves wanting to project a dynamic image with their cars.

It has worked, as Black Badge models are selling to customers who are 20 years younger than the average Rolls-Royce customer.

“In creating Black Badge, we were conscious of satisfying the different demands of these new customers,” explained Alex Innes, Rolls-Royce designer.

“Not only did they demand an alternative image for themselves, they demanded authentic Rolls-Royce engineering substance to underpin it,” he continued.

That means a pumped up engine room in all three Black Badge luxury liners.

The eight-speed automatic transmission is also programmed to deliver sportier gearchanges, with less focus on preserving the imperceptibility of usual Rolls-Royce shifts.

The muscular $420,000 Salamanca Blue Wraith grand touring coupe’s power holds steady at 623 horsepower, but it muscles up with an additional 52 lb.-ft. torque, bringing its total to 590 lb.-ft., ensuring that it can back up its sinister looks with equally impressive performance.

The $430,000 Cherry Red Dawn is a plush four-seat convertible in the grand tradition, so its mission of comfort for all four occupants is intact, though our drop top was a bona fide speedster, thanks to its 593 horsepower and 620 lb.-ft. torque.

We put the Dawn’s acceleration to the test when we found an upcoming on-ramp was a left turn and not a right exit, while we sat in the front row of cars waiting for the light to change in the far right lane of three.

When the light turned green, our red missile rocketed away, sweeping easily across the three lanes make the left turn for the on ramp ahead of the other cars.

All three cars retain the familiar Rolls-Royce above-it-all detached feeling in the driver’s seat, wafting effortlessly along with only the mildest hints of events in the outside world.

They continue to use Rolls-Royce’s older steel platform from before the debut of the new Phantom and the all-aluminum Architecture of Luxury chassis that also underpins the fabulous new Cullinan SUV.

While the Cullinan has consciously put the driver in touch with the road, these traditional models retain that characteristic Rolls-Rolls ability to float above the road more than roll over it.

The selection of materials and the execution of every detail in the Black Badge cars serves to remind us of how Rolls-Royce became “the Rolls-Royce of cars.”

The appearance of feel of every surface illustrates why Rolls-Royce says that its cars don’t compete with other luxury car brands, but with vacation homes and artwork. It is because traveling in a Rolls-Royce is a vacation in its own way and absorbing its aesthetics is an artistic experience.

The Black Badge models only underscore those traits and provides a contemporary spin on the traditional Rolls values. We’ll be curious to see in what ways Rolls is able to apply this concept to other models and to stretch this brand as it recruits the next generation of customers.