This Bentley Continental GT on Treads Is a Killer Luxury ‘Ultratank’

Go to war in style. 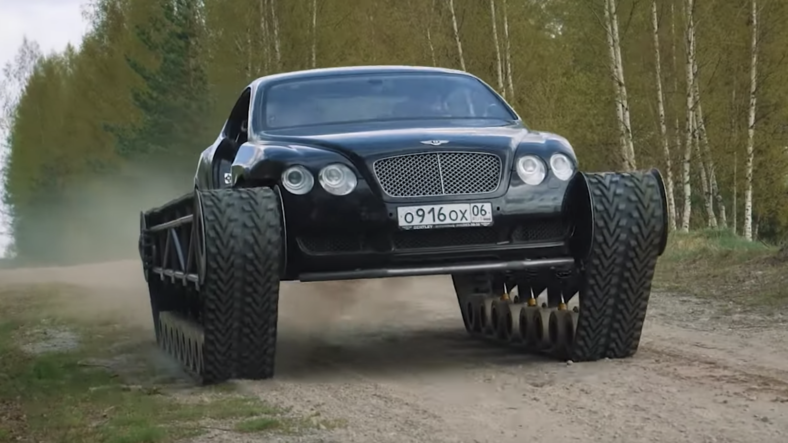 You could try this at home but it’d cost a lot of money. Still, the visual that results from placing the body of a Bentley on top of tank treads might just be worth it.

Russian Youtubers AcademeG took a Continental GT and slapped it on treads and came up with the perfect vehicle for a luxury drive across the snowy wastelands. Or into battle, or to look like the richest savage in the Mad Max universe.

Per Autoblog, this was no casual weekend project. When it was purchased, the Bentley needed plenty of work. Okay, a lot of work, given AcademeG had to chuck the engine, frame, and drive train. Then:

AcademeG took the coupe to Swap-Point, who replaced the stock motor with Toyota’s Japanese-market 4.3-liter V8 used in the Toyota Crown Majesta, Celsior, and Soarer and Lexus GS, LS, and SC 430. The engine sends power to a solid rear axle only through a torque converter automatic. From there, the twist is transferred to a set of heavy vehicle tracks measuring 98.4 inches long. The Bentley’s passenger tub and upper portions mostly survived the transformation, but tube-frame construction replaced the stock architecture front and rear.

There were problems at first, but only the kind you’d expect when converting a luxury vehicle into a weapon of war.

Autoblog reports there “wasn’t enough tension on the tracks, and the rubber nubs aligning the tracks with the wheels aren’t substantial enough, so the tracks rolled off the wheels during hard cornering.”

Also, it doesn’t have brakes. To slow you have perform a sawing motion with the wheel that slows the inner treads when turning the Ultratank.

The videos above show just how much work the Russians put in on it (be sure to click the “CC” to get the English translation), and reveal just how challenging such a project can be.

Does that mean it isn’t worth it? Of course it’s worth it. Especially if you’re being paid to do it for a TV show, but even if you aren’t and have the means, go for it.