The massive yacht concept is “almost entirely made of glass.” 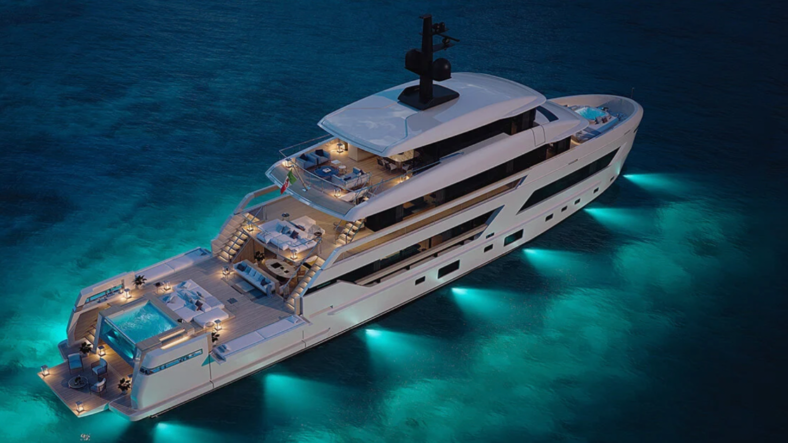 Italian yacht designer Sanlorenzo has teamed with architect and designer Piero Lissoni for their latest luxury vessel model, the 144-foot X-Space. As designed, the superyacht is apparently set to live up to its name.

No, the X-Space won’t also take you to actual outer space, but the gorgeously designed five-deck ship was built with a “transparency” theme in mind, meaning Lissoni’s interiors rely heavily on glass to facilitate a sense of flow as well as capaciousness.

In a statement first quoted by The Robb Report, Lissoni said that his “X-Space has been forced to become a boat almost entirely made of glass: There are large panes of glass, large windows and some of the cabins no longer even have portholes but glass wall.”

Paradoxically, the X-Space’s design seeks to blend that transparency and openness with private interior spaces. Robb Report writes that this novel design “sees the wheelhouse and captain’s cabin moved to the bridge deck so that the upper deck can be dedicated exclusively to the owner.”

In a sense, then, it’s akin to a ritzy condo on the high seas, and the owner’s top deck accommodations sound luxurious and include a swimming pool and private terrace.

There’s a method to Lissoni’s “madness” in shifting around the typical locations for crew and passengers — more room for guests (the X-Space has room for 18, ten passengers and eight crewmembers).

Among these spaces, guests can roam a large living area that flows into an open lounge. If the owner’s cabin is a luxury apartment, then this is his or her entertainment space, and with innovative folding balconies, the whole area can be enlarged by an extra 194 feet.

Other amenities planned for the X-Space include a multipurpose area and an infinity pool.

While the X-Space model is still more in the planning stages than not, Sanlorenzo states that it will have a maximum speed of 15 knots and at a slightly slower 10 knots the superyacht could travel up to 4,000 nautical miles.

Sanlorenzo is currently building the first real-world X-Space. According to Robb Report, it is likely to hit the high seas sometime in 2023.