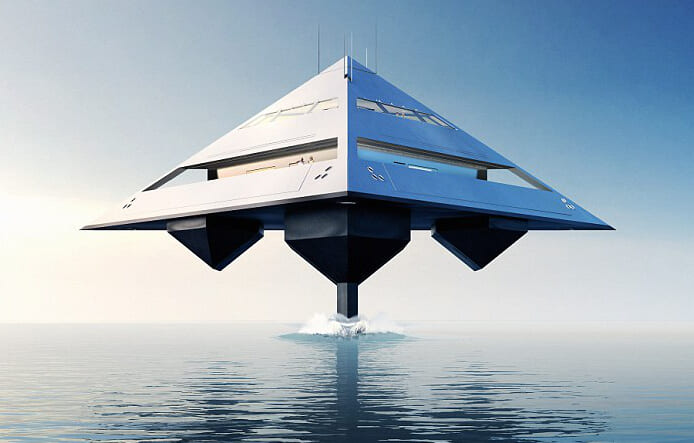 Levitating a hoverboard, mesmerizing plant or wireless speaker is one thing—but an entire super yacht…not to mention one that’s shaped like a giant pyramid?!That’s London-based architect and designer Jonathan Schwinge’s idea: a simple, spacious luxury sea vehicle that rises above the water at high speeds.

It’s based off a HYSWAS (Hydrofoil Small Waterplane Area Ship) system similar to what’s been developed by the naval architects at U.S.-based Maritime Applied Physics Corporation. In other words, it just might fly—or float, or whatever.This mega-vessel would have interesting implications for longer voyages, given the lesser drag it would produce against choppy waves. But for it to work, they’d need to perfect the propulsion and computer-assisted stabilization.After all, the only heaving, pitching and rolling that should be happening on this Luxor-like liner should be between any number of ultra-privileged consenting adults aboard it.