The Shelby Terlingua Mustang is a 750 HP Track Monster

And for $66,000, you can transform a regular ‘Stang into this majestic stallion. 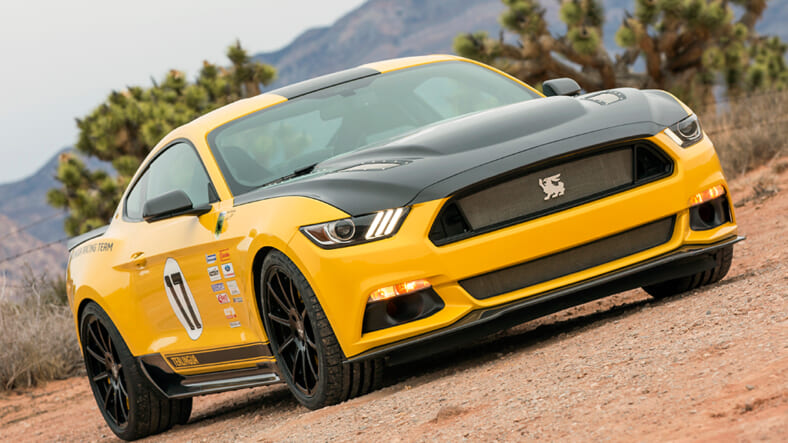 Automotive legend Carroll Shelby‘s Terlingua, Texas ranch was both the location of his annual chili cook-off and the namesake for his Terlingua Racing Team. The team’s signature yellow and black paint scheme was best known for the famed Shelby Mustang that Jerry Titus raced in the Sports Car Club of America Trans-Am racing series in 1967—which later inspired the name of Pontiac’s top-performance Firebird.

Shelby American’s latest project, the Terlingua Mustang, gallops into this weekend’s Barrett-Jackson Classic Car Auction in Scottsdale, Ariz. But rather than selling the iconic muscle car, Shelby is offering a nifty conversion service. For $66,000, Shelby will take your 20015-16 Mustang GT and transform it into this screaming yellow and black, 750-horsepower track monster.

This badass bumblebee is loaded with fast-looking Shelby carbon fiber parts backed up by genuine go-fast hardware, such as the Whipple supercharger that pumps up the car’s V8, Eibach sway bars, springs and shocks that keep the car planted, and Brembo brakes.

The car also gets beefier axles to take the extra power, a short-throw shifter for quicker gear changes and a rumbly Borla exhaust to make the Terlingua sound as good as it looks.

These performance goodies may not make you able to drive like Shelby’s wheelman Titus did back in the day, but they can at least make you feel like you can.